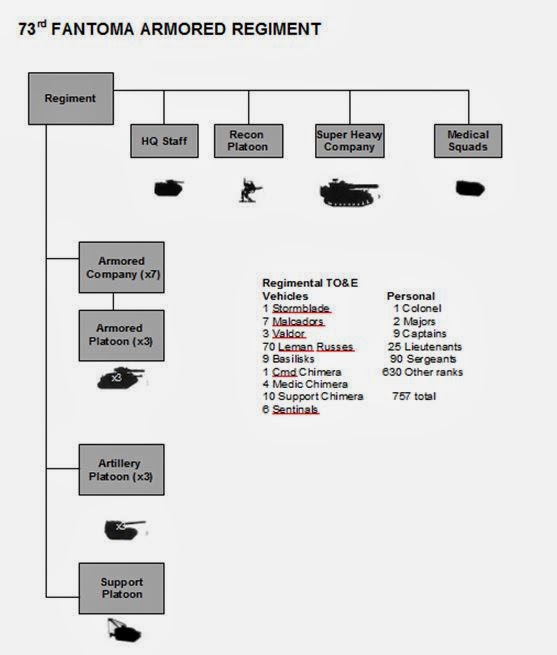 The 73rd Armored Regiment has fought for the Emperor for the last 13 years.  The regiment is composed of 7 Armored company equipped with variety of Leman Russ battle tanks.  Very few tank regiments originating from Fantoma are equipped with the more exotic variations like the executioner, Punisher, Eradicator or Demolisher.  Super Heavy or Artillery support is also provided by the 73rd Armored, and against common practice in the Imperium Super Heavy Units from the sector are also equipped with Malcador and Valdor tanks.  The Super Heavy Company is composed of 1x Stormblade, 7x Malcadors and 3 Valdor tanks.

The regiment has no inherent infantry support and relies completely on support from one of BG-82'S infantry Regiments. In addition the 73rd has been assigned to BG-82 since its inception and is also contains the famous Tank Ace Vet. Sgt. Knebel, with 168 confirmed kills, more than any other tanker assigned to BG-82.

Posted by Marshal Argos at 6:00 PM