By the authority of the Immortal Emperor of Mankind, this mission briefing (and any transcript thereof) are classified information, for Field Marshal Straun eyes only. Priority Grade: Top Secret Chipmunk

Due to increased inter-system raiding only limited reinforcements are available. At this time no new regiments can be provided outside of the previously authorized reinforcements sent by Fantoma Command in route via Rogue Trader fleet. To ensure their safe journey, Imperial Navy Task Force 3535 has been provided as escorts. Afterwords they will remain in system to combat pirate incursions.

The following Fantoma units are currently in route, you are free to dispose of them as you see fit.

Be advised that these replacements are being transported by a Rogue Trader Duke von Stetson, as it appears that he has some agreement with the Fantoma Planetary Governor. No doubt it is only a cover to meet his own needs, but be carefull to learn any valuable information if you have the opportunity. Current status and numbers in the RT fleet are at this time unknown, as well as the number and type of ships being provided by the Imperial Navy. We expect all forces to be ready for departure within the next week, expected travel time, His most Holy Emperor willing, is 3 weeks Terra standard.

So what does all that mean in game terms? Well, it means that I hope to be getting back in BFG next year, and that I might just get around to painting up another platoon for my Drop Troops and add some more armor, with the plan to build a Super Heavy Tank Company. In addition I hope to make a small RT army using the rules from either the DH or WH codex's, and a mix of models from 40k and Fantasy.

Posted by Marshal Argos at 4:02 PM No comments:

Well after a nice 40k'less Christmas I got the chance to sit down and do a little work on the new Valdor SHT. The main gun is a combination out of tape, Marker pen, and Super Glue bottles. The rest of the tank, as can be seen is paper and cardboard.

The first pic is a front on shot, showing the drives hatch and gun mount. I'm not sure if I'm going to keep the main gun or not, if something new catches my attention in the next few days I will prolly replace it. If not than it will be glued in place. Still have to do the cover though. 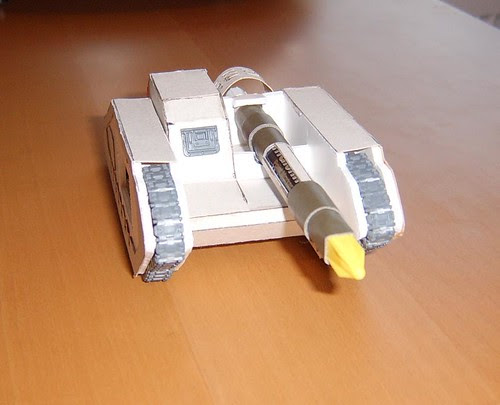 Next up is a view of the left side and where the gun will go. I cut out a place to mount the gun like the normal Malcadors just in case. My plan is to build a sponson like FW's and also make a normal one and see what I like better. 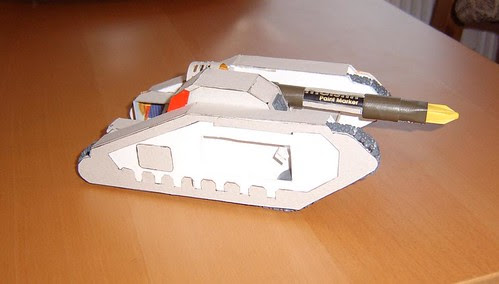 And lastly we have a view of the right side, here you get a little better view of the main gun. I'm still working on ideas on what to use to make the power couplings for the main gun. My best idea as of yet is to use straws, you know the bendy ones, I think they'll work pretty good in this case. 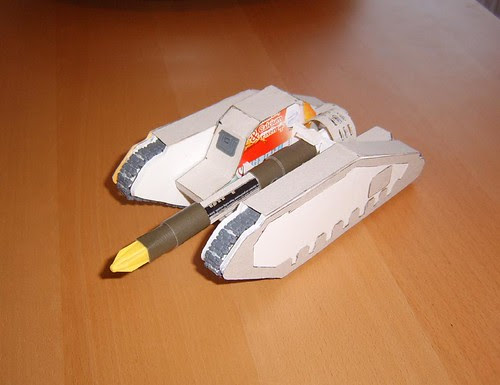 Well thats it for now, here's to hoping the bits I ordered get here soon so I can do a little more work later in the week. Comments are of welcome.

Email ThisBlogThis!Share to TwitterShare to FacebookShare to Pinterest
Labels: Valdor

So, after seeing the new FW Valdor pics (Link to FW) I just had to have one, and so the following pics show you the first hour of work. Why does it have to be christmas, and why does it have to interfere with me building this tank!!! SO, I hope to actually have this done before work starts on the 5th but we'll see what happens. 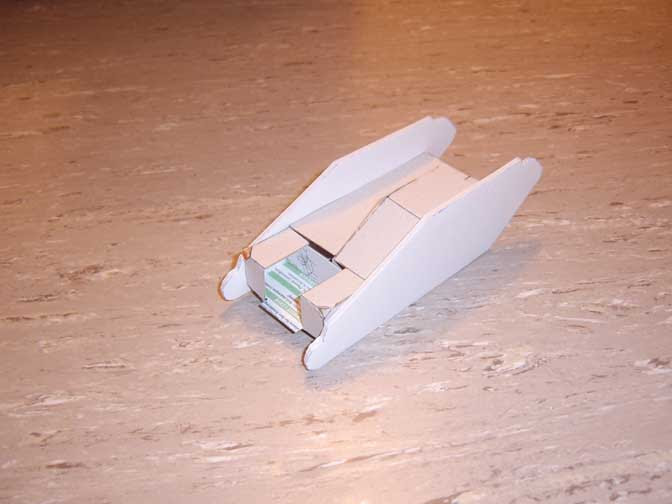 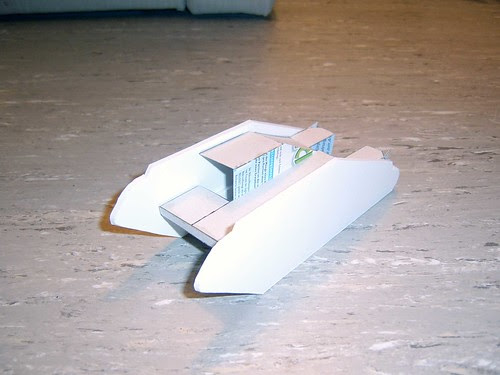 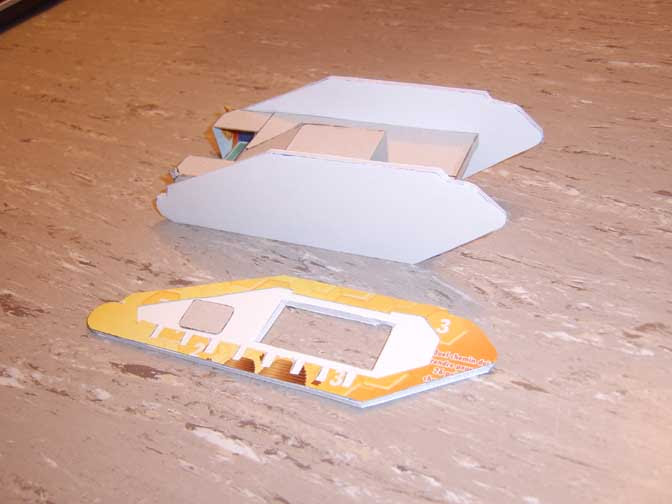 I'm not really sure how I'm going to build the main gun or the housing for it yet, so I hope to come with ideas, or better yet do any of you have ideas? The tracks and small details are not a problem, and I was thinking of using a pen and maybe hitting up a DIY store but I have wait a few days, darn holidays, and damn the Germans for closing all the stores at 8pm year round. I could be in walmart right now buying what I need, instead I can only dream.
Posted by Marshal Argos at 11:48 PM 2 comments:

Email ThisBlogThis!Share to TwitterShare to FacebookShare to Pinterest
Labels: Valdor

This weeks ++From the Warp++ round table discussion is, as stated above, how did I (we) build my last army, and what would I recommend to someone just starting out. Oh, and to keep it under 5 sentences.... I think that's possible but we'll see as I write this.

So what came first? The army and fluff came first, the lists are made later prior to each game based on how I feel like playing that day. In other words I wanted an IG army so I thought up a little fluff for a drop troop regiment that gets a little support by armored units, think Operation Market Garden from WW2. You know where 3 Airborne Division capture bridgeheads deep behind German lines and the XXX Armored Corps is supposed to move up and relieve them. Well it didn't work quite as planned, but that doesn't really matter here. What it did though is help me find my army. After doing this I quite literally went out and started buying what I needed, 150 troopers, armor, heavy wpn squads, etc... etc... Needless to say my wife was starting to wonder what all these boxes were and where all our money was going.

Now of course this is an expensive way to go and is not to everyone's tastes. In fact since moving to Germany the most players I've meet do the opposite, the first build a list and start small. What I mean is they start with a 750 point list and slowly work their way up trying out different units as they go. By all means this not a problem in fact unless your a fluff nut, or someone who enjoys the fluff/hobby side as much as a few of do, then I would recommend this option. That said, if you have the time, money and love to put into your army than buy it all at once and see where it takes you.

Well I'm well over the 5 sentences so it won't hurt to write a little more. What I wanted to share was something I thought of last night after writing this. Why not take the third option and comine the two. What I mean is write a little fluff and background while at the same time creating lists and gradually increasing. This way you create and paint your army to fit your fluff, while trying out different ideas with your lists?
Posted by Marshal Argos at 10:25 AM No comments:

Well, I don't usually just post rumours and things about new releases and other misc. stuff but this is one that I just have to show. So far FW has released 2 parts of one of their upcoming models, and from I've seen so far I'm just falling in love. I've been playing with the idea of creating an Inquisition force to help out my IG since... well... 3rd Edition. Although I have a few models painted there just wasn't enough motivation or time to get them done. But after seeing this: 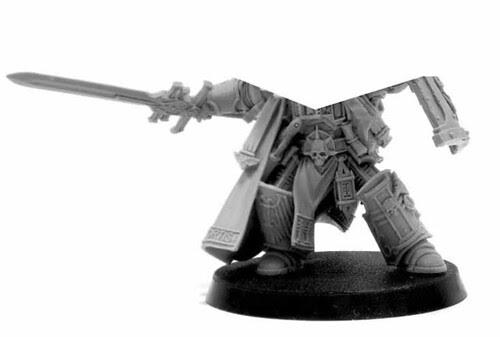 Time will be made!!
Posted by Marshal Argos at 5:57 PM No comments:

It’s been a while

Well after a short trip through India and the Med we're finally home.  I for one am ready to get back into working on the 50 or so projects that I have going on.  The only problem is that the holidays are knocking and I don't really see getting a lot done, but there's always hope!

Some of may have noticed the FtW Logo on the right.  Right before leaving I joined a Blogger group over on ++From the Warp++  Basically it's a feed that brings together 40k bloggers from around the world.  I have to admit it was a great idea and really helps to bring everyone together. Follow the link to find out more.

Well expect to see more regular updates again as I get to work on another 2 Malcadors (for a friend), finish up my RT force (Using DH rules), paint another 50 Guardsman,  get the last of my dirtbike Roughriders done  and whatever comes up between now and finishing all this stuff.
Posted by Marshal Argos at 11:22 PM No comments: