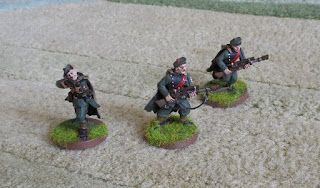 "Sir the scouts report seeing enemy movement on the left flank. Initial reports estimate Platoon size force attempting to move up between us and the nineteenth."

"When was this reported?"  Col. Sunderland asked as he strolled through his command tent., "You der?" he asked of an Aide standing nearby. "never-mind,  You go and get dem horse jockey's on da Vox and tell'em to be 'lert. It appears the enemy believes we're not up tada task.  Oh, and let dem Lancers know that we got troopers out der, we don't want one of our own gettin skewered. " 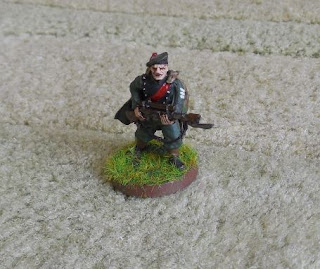 Sgt. Harley has been with the Regiment since it's founding.  He's one of the few troopers who grew up in the so called "Back 40" on Scansin, and brought a wealth of knowledge with him. Currently he is part of the Scout Training team and responsible for passing a bit of that knowledge on to the new scouts. 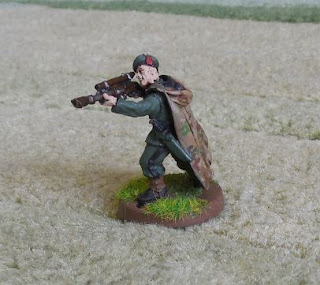 Trooper Vernon is your standard scout trooper.  Not very social, a little bit introverted, and always on the sidelines where he can see what is going on. The scouts are the eye's and ear's of the Regiment, and should be able to hear and see all. 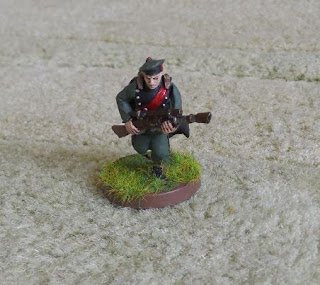 Trooper Basler is your typical "Cherry". He's just made it out of the annual Scout trials and is working hard to impress his Instructors. What he doesn't yet know is that before he is truly a part of the scout platoon he has to finish a 6 month probationary period. 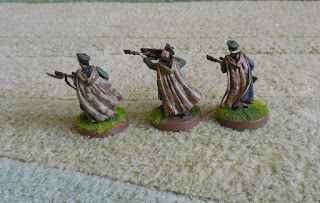 Posted by Marshal Argos at 5:00 PM No comments: 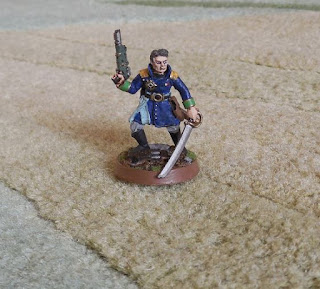 Brevet Col. Joesev Sunderland is one of the many "Highborn" officers serving throughout the Regiments founded by the planet Scansin. After completing his time in the Officer Training Battalion then 3rd Lieutenant Sunderland not only volunteered but fought his way off planet to join the ranks of the Imperial Guard.

After serving at Sector Command, Maj. Sunderland was offered the chance to take command of one of the companies in the newly formed 7th Scansin.  There was no hesitation on his part, as he felt that he would be able to bring his years of experience to the newly founded Regiment.  Little did he know that the original command staff of the 7th Scansin was much more interested in looking good, than they were in being effective. 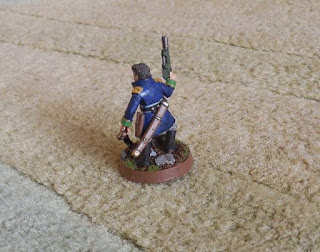 Although he was not well respected in the officer ranks, Maj. Sunderland ensured that his company was well drilled in the art of war.  Years of experience had showed him the importance of drill and training, and he would be damned if his troopers couldn't fight for the Emperium. Following the disaster that was New Praxis, most of the officer billets in the 7th Scansin were open.  It was at this point that Marshal Argos, pulled strings to get Maj. Sunderland temporary Command of the 7th.

Once the 7th had been resupplied and was back up to combat strength, Marshal Argos once again ensured that the Regiment was assigned to BG82, and gave Maj. Sunderland a Brevet to Colonel. 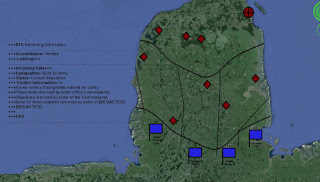 After suffering heavy losses on the eastern flank by Battle Group 525 the 4224th Imperial Guard army called a halt prior to the coming of winter. The Lord General wanted to ensure that all three Battle Groups would be able to make the final push into the peninsula in the spring and bring the Defense of Avenweddon to a close.  This would free up at least two of the Groups for further action within the sub-sector.  As to which of the Battle Groups would have to remain on Avenweddon for the cleansing no decision has yet been made.

During the winter months the Army used the time to regroup, rearm, resupply.  The order of business was primarily on regrouping and strengthening of the forward lines. Many of the Regiments in the army were drawn from planets within the sub-sector and therefor were reinforced without having to requisition further Imperial assets.

With the Army returned to a fighting capability, and supply lines secure the Lord General is making plans to restart the offensive. Intelligence reports that the enemy hardly could have reinforced in this time as the Navel* blockade reported no enemy ships in the sector.  Even if that is so, it will still be a rough slog forward as they no have no doubt dug themselves in deeper than ever before.  For the elements of BG82 this shouldn't be a problem as the right flank is more flat leading out to sea.  As for the other two Battle Groups...  Only time will tell.

* Yes that should be Naval as Siph points out below.  But well, I made the mistake I have to live with the mistake.  And besides I think it's funny.

We interrupt the regular schedule of this blog to bring you the following information.


As of the 6th of March I've been at this for blog for 8 years...  In comparison to some of the more "established" blogs I think that's pretty good. Hopefully they'll be another 8 more!!

You may not return to your daily grind. 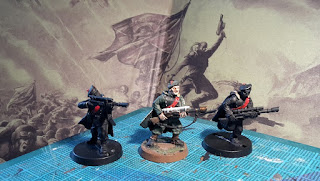 Every Infantry regiment founded on Scansin, has at least one Scout Platoon.  These troopers usually scout out ahead of the main formation and relay information back to Regimental Command.  Experts in the art of reconnaissance and stealth, these troopers work in small teams of 3 to 6.  Equipped with a light weight uniform, (lacking the built in armor) camo cloak, and various other tools of the trade many a foe has fallen to the skilled shot of a recon scout. 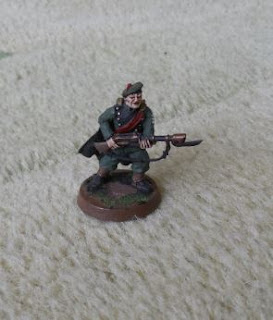 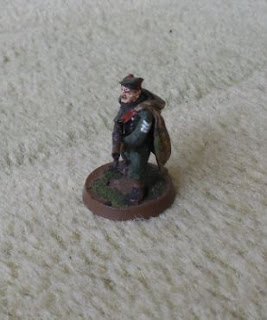 Due to their location, sometimes far ahead of the main body, they can also be employed as Snipers.  Because of this all troopers assigned to the Recon Platoon are required to be excellent marksman.  Those that can no longer keep up are sent back to a line Company. 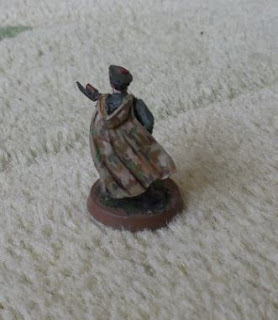 Now I just have to finish up a few more of these and I'll have a Ratling Squad or two. 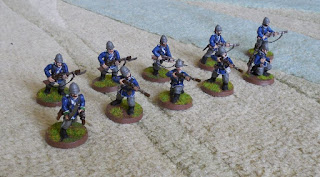 And I finally finished up yet another squad.  Sgt. Burcham with  2nd Squad, 1st Platoon, 9th Company, 7th Scansin.   Only one more squad to go and I'll have 1st Platoon done.  Not to sure if I'll do up the entire 9th Company, as that would require me to paint up 9 more Infantry Squads and 4 more Command Squads.  And although I would love to do it, I'm not sure if I could get the requisition script signed by the "Major General". 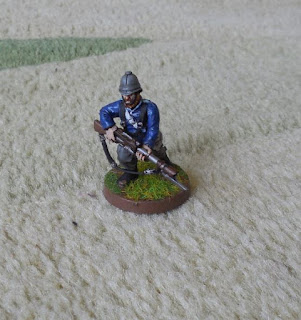 I just like the way he came out so of course I had to put up a photo.  I really, really wish I knew where I got all the different heads for these guys.  I know they are a mix of Vic Mini's, Curious Constructs, and I believe Max Mini.  But which ones came from where....