Well I got in my 3rd game of 40K this year and my 1st game of Apocalypse under the new rules.  14000 Pts per side, with 14 players, and  2k pts per person.  The low point limit per person really made it hard to get together a good list, so it really took a bit of coordination from the whole team to make sure that we had all our bases covered.  To further complicate things I have been away on a business trip the last few weeks and was hardly able to get anything together.

So I won't bore you with my list, but will instead show you a picture of my list instead. 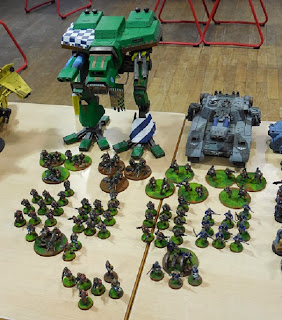 2000 Pts on the dot.  Not much fits in there, but the Double-Barreled Laser Destructor and a pair of Plasma-Blast guns are enough to inflict quite a bit of damage.  :)

Well to keep a long story short, and of course save a bit of fun for the my next "fluffy" post I won't bore you with all of the details.  We started at 9am and got done shortly after 8pm, and the tragic thing is that we had a great opening 2 turns, but ended up loosing the game.  Canis Vulpis (my Warhound) lived through the entire game without being shot at even one time.  In return, she took down untold enemy infantry and helped take out a few tanks, but nothing glorious...

The biggest problem we had was the CTan Mephet'ran.  He made sure that the we fought the entire game under the "Night Fighting" Rules which ensured that all of our vehicles only had a 36" range until something illuminated it.

t'scha, In the end we made a few other mistakes but none that really were game breakers.  We had a good game and I'm really getting the urge to get back into the game again.  I work up a more "Historic" battle  report over the next few  days and try to get it posted before the end of the week.

Thanks to all members of "GT-Battlezone" for putting together a great Apocalyptic day!!! 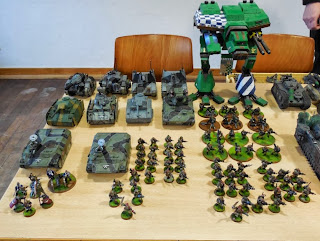 Intelligence
The latest intelligence provided by the Departmento Munitorium, and the agents of the Inquisitor CLASSIFIED have determined that the Forces of Chaos have once again started to gather under a single flag.  Although the Imperial Forces have worked hard to disrupt the forces of Chaos, we believe there is a new power in their leadership.  This new leader not only has the charisma to gather troops under a single flag, he also appears to be working with the both the alien and Necrons.

As we receive new information we will forward on the details that may be pertinent to you being able to fulfill your orders.

Deployment Orders
1. Form a Task Force consisting of no less than 50% of your available combat forces and proceed to location 32UMC612514.  PDF forces will advance to hold your current line until BG82 can return to it's current deployment zone.

2. If required Det. 6 of the Legio Astraman will be made available for SH support.