Well this took longer than I expected to get out, especially with the holiday weekend and of course trying to get my thoughts together so I could write this. But finally here it is, my own thoughts on the new IG codex.

The Good or at least things I like. I'm going to try and keep this in some sort of order but there's no promises. First up is of course the order system. Although the range is quite short (6") some of these orders are just outstanding. The ability to rally a unit falling back, to fire an additional shot, and to count weapons as twin linked is going to be huge. Especially if you keep your Heavy weapon teams within range of the Company CO or Plt Ldr.

Now, taking some of those orders and giving them to combined squads... Imagine 3-5 squads combined so 30-50 troopers firing at an enemy unit 20 inches away. With FRFSRF you'll get between 60 and 100 lasgun shots. I'm sorry, but there's not many units that can stand up to fire like that. Another option would be to combine a few squads and tie up the enemy's CC squads. Attach a special character to this over sized unit and now you've got a 20-50 meat shields.

Special characters are going to play a HUGE role in the next codex. Something that I'm both looking forward to and dreading. On the one side it gives players (myself included) to write up fluff for our own character and include him in the game, but using the rules for a named character from the codex. Now one problem I have with that is that you have to use the wargear with that character.... oh well, I can build my model any way I want and just use counts as. I also like the ability to put special characters from the squad level all the way up to the army leader. The biggest problem I have though is that every 2nd IG player is going to be taking multiple special characters in every game.

The last thing I'm really looking forward to is Arty Batteries. I have always believed in having proper artillery support whether your on a short patrol to a long range recon. By combining 3 Bassies you can POUND a unit to the ground with arty, especially with Multiple Barrage rules. This is something that I am really looking forward to, and already have plans to bring in at least two more pieces of artillery into my army, either 2 Griffons, or one Griffon and another Bassie.

So what does this all mean for the IG and specifically my army? Well as normal the first few months are going to be hell as everyone, myself included, is going to be trying out the new options. Unfortunately it also means that the 313th Drop Troops will no be able to played as Drop Troops, it looks like I'll be working on some light infantry tactics and some combined arms tactics in the near future. The thing is though, I'm looking forward to it, even if it does mean my old play style is finished. Here's to looking at the future, and what an interesting future it looks to be.
Posted by Marshal Argos at 4:37 PM No comments:

5th Ed. IG and my thoughts.

So I sat down for a night of reading and studying...  The IG codex that is.   In this post I am only going to tell you about my first impressions, my "gut reactions" so to speak.  Let me preface this post with saying I have done my best to stay out of all the rumor threads flying around as I didn't want to be jaded prior to actually getting my hands on a codex.  So there may be things here that you have known about for months but I just learned last night.

Yes, I have a knot in my stomach.  It's bad, and good.  I'm not sure yet which is better.  Most of the things that get me are minor, and things I've expected for a long time.   Two small things are that my Sgts all loose the option for bolters or lasguns, the must have Pistols and CCW's and the Hvy Wpn team is a armed with a single weapon.  Meaning that the loader is truly a loader now and may not fire a 2nd wpn.  Not really life changing but these two bother me.    In the first I like to model my Sgts with Bolters or Lasguns, it's just one more long range shot in the squad.  In the 2nd if you put a Hvy Wep team in an Inf squad you loose that Lasgun shot from the loader as well...

The 2nd biggest thing that got was how the Vox Network is going to work and the overall loss in Leadership.  Officers no longer have the "Leadership" special rule, instead they can issue orders either 12" for the Company HQ Officer or 6" for the Plt.  SIX inches?  Common that really gets under my skin, and the fact that you can't extend the range with a Vox network...   Vox only allows re-roll of orders that's it, nothing more so you still have be within in 6 or 12 inches.   Even if a squad is within the above distances they are still stuck with the Sgt's leadership of 8.  Ok, that's still better than the 7 before but is still lower than the 9    IMHO this really turn's IG into a gun line.   The PLT HQ is gonna have to be Johnny on the spot trying to stay in range to issue orders.   Planning ahead is going to be BIG to insure that the HQ is in command aura distance.

One more thing that I'm going to have to wrap my head around is the vehicle squadron rules...  Squadrons have to fire at the same unit.  So if I have 3 LR's I can use them in seperate FO's and fire on 3 units using all their wpns (I Love the new Lumbering Behemoth rule) or I can 6 in squadrons of two and still only fire on 3 units or 9 in squadrons of 3 and STILL only fire on 3.  Now in the last case I'm pretty sure that 3 LR's fully decked out will pound an enemy unit.  But the fact that they all have to fire together just rubs me the wrong way.

Oh, and I had been hoping that with the addition of all the Special Characters they would act somewhat like the SM ones.  Where for example by choosing a special character you can "unlock" certain units, now I had read a that was only a pipe dream, but it was still a dream, and shall remain a "dream".

And lastly and these are purely personal issue's.  I'm going to have to remodel my Chimera's to add the Hvy Bolters because they are now standard kit.  There's no way I can afford enough Valkyrie's to keep my army an Drop Troop army.

So I'm sorry for only putting negative waves in this post, my 2nd post on this subject is going to be what I LOVE in the new 'dex:   Arty Batteries, Mortors as standard for Hvy Wep teams, 6x Veteran squads as troops, Special Characters and my thoughts on the future.
Posted by Marshal Argos at 11:08 AM 1 comment:

Well I finished the banner yesterday and after posting it up on a few boards I got the question on how I made it so I'll just give a quick run down of the process. Maybe it will help others who are looking at doing the same sort of thing. Ron over at FtW has done a something along these lines as well using cardstock (his post is HERE). That's something I did for all my BT Banners years ago and can't agree with more. The difference this time is that I had a banner from Warhammer Fantasy that I wanted to use so I had to draw it on the banner before painting. 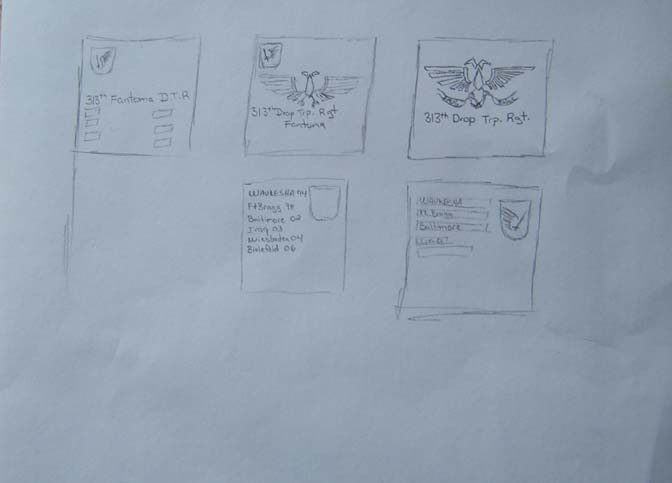 The first thing I did is drew up so rough drafts to get an idea of what I wanted to do. After deciding on the layout, I carefully copied the drawing with a pencil onto the banner. The trick is patience, and a steady hand. Don't be afraid to go back and paint over mistakes to get it right. Once the outline is drawn on just paint in between the lines to get the final banner. For the lettering, I drew two lines, much like the paper you use when your learning to write, one above and one below. Then carefully painted the letters between the lines, when done I just went back and painted over the lines with the background color. The finished product can be seen below... 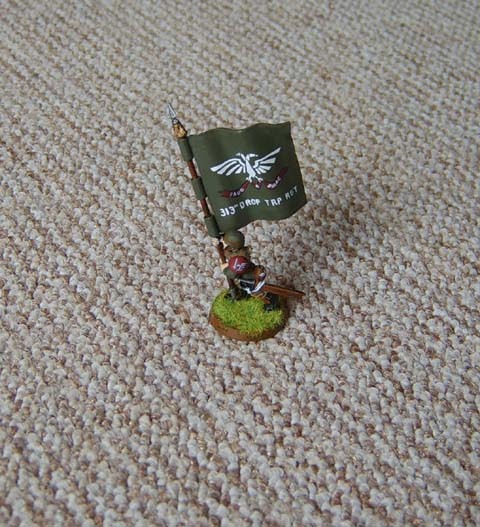 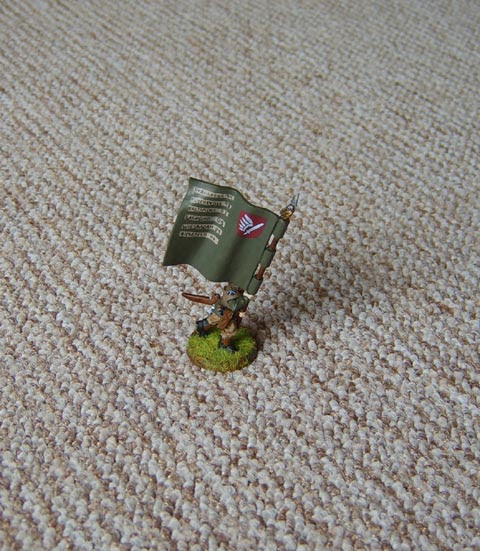 Well with the coming of a new codex I thought I would make a few addition to my guard. The first is going to be a new Regimental Banner, as seen below. I'm not done with the back but I plan on putting the names of the cities I've played in sort of like battle honors. So far I can add Waukesha WI, Fayetteville NC, Baltimore MD, Baghdad, Frankfurt DE, and Bielefeld DE. I started doing this a few years ago, but the old banner is just to small to write it out. Hence the new banner. OH, and an internet cookie to who ever knows what the motto means.... 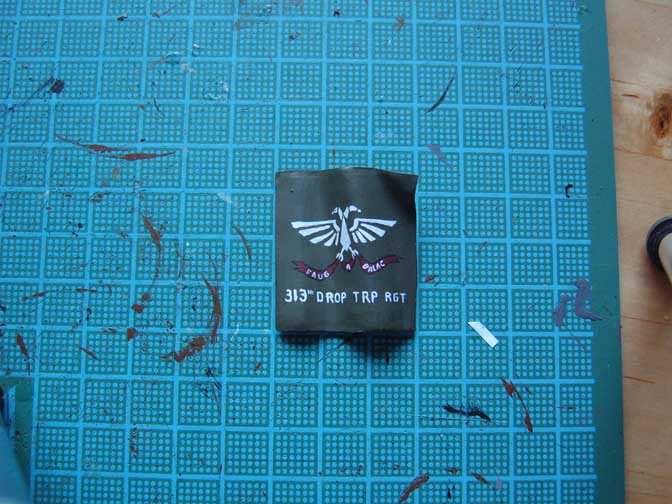 And here's the first three mini's from my Mech Infantry Platoon. 6th Plt, 3rd Rifles, 73rd Armored Rgt. What you see in the pic is the Plt Ldr, a Sgt, and a normal trooper. They are still WIP as you can see from the pic but wanted to give everyone an idea as to what I'll be working on next. 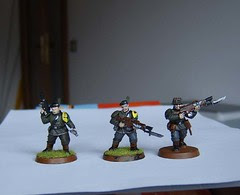 Oh, and before anyone says or even thinks "95th Rifles" or "Sharpe" I have something to say. My inspiration for these came from 3rd ACR "Brave Rifles" and "2nd Light Bn. Kings German Legion", and was something I had working on the back burner for about a year now. I didn't even know about the Sharpe series until a few days ago when I saw this blog "Mordian 95th Rifles" and had to go find out what it is. That said, I've seen the parts of the first episode and it's not that bad. If I had known about the 95th and the Sharpe movies prior to coming up with my ideas for fluff for these guys or the paint scheme are anything else I prolly would have gone in an entire different direction.

Anyways, comments and criticism are always welcome.
Posted by Marshal Argos at 10:54 AM 2 comments:

I was that which others did not
want to be.

I went where others feared to
go and did what others
failed to do.

I asked nothing from those who
gave nothing and reluctantly
accepted the thought of eternal
loneliness should I fail.

I have seen the face of terror;
felt the stinging cold of fear;
and cried, pained, and hoped...

But most of all I have lived times
others would say were best
forgotten.

At least someday I will be able to say
that I was proud of what I was...
a Guardsman.

Posted by Marshal Argos at 1:23 AM No comments: