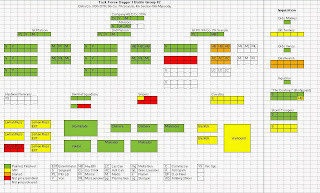 All hail Admiral Drax for this wonderful idea.  I've known about it now for a while, (at least the last couple years) but never thought I really needed it myself...   Recently I started thinking about it though and I realized that I really did have a lot of models that weren't really finished. Sure most are OK for the table top, but not really Finished.

So that is going to be one of  my 40K  hobby goals for the year.   No I don't plan on finishing it all,  but I would like to make a dent in it and keep the chart up to date.  Maybe I'll try to post an updated chart every month.  That might just give me the extra kick to keep working on all this stuff.

"Son,  how do you expect to requisition the replacements we need if you don't even know how many troopers we are supposed to have?  Now pull out your slates and lets have a look."  said Marshal Argos, to one of the clerks outside the Ops room, as he pulled up a field chair.  "What, you need to speak up son."

Slowly the young trooper looked up, glanced around, and replied. "Marshal Argos Sir, We don't have an exact SO&E, none of us were here as the Battle Group was formed, and we haven't found any slates with that Information.  All we have is the size of each Regiment as it was assigned to the Group, and upon it's arrival."

Well I'll be, thought Argos. We probably left the slates back on New Praxis.  What was that Quartermasters name again?  To bad he was already dead, or I'd have him shot. "Ok, then lets start with the size of each Regiment, check your Records and use the larger size.  Either that upon it's arrival or as it was assigned."  Argos stood up and headed back to the Ops Room.  "Oh, and send me your Supervisor. There's a few details about the upcoming operation that I'd like to discuss with him."


"We're still holding sir but it's not looking good. We've had to pull our forces out of the eastern part of the region.  The vile forces of Chaos are using some sort of heresy to block out the sun and wreck havoc on our instruments.  We can barely see the enemy, much less maneuver against him."  Col. Pallidar hoped that he was getting through to Battle Group command.  The atmospherics were only getting worse the closer the enemy came.

Turning away from the Vox, Marshal Argos could barely control his anger.  "Get me the senior representative from the AdMech and from the Ecclesiarchy.  One of them had better have a solution for this."  We need our sensor net we we're going to defeat these bastards.  "And get one of the Witches over here.  Maybe one of THEM can do something about this, if the others can't."  The battle had started early, but everything started out as planned.
But somehow the sun never came up, shuddering Argos tried to push the thoughts from his mind.  "Marshal Argos, what is it that I may do for you?" Squeaked the Tech Magos as he came upon the battle plotter.

My Emperor, when will he get that speaker fixed, maybe someone needs to tell him.. thought Argos before replying.  "Well for one you can have someone check your voice box.  You're going to kill someone with that high pitched voice of yours.  And after that you can find a way to get our tactical sensor net back up and running.  Without it we're shooting in the dark.  I have 3 Regiments up there with untold PDF forces and they're all useless to me if they can't see the enemy or at least pass on targeting information for the artillery and Super Heavies."
"Sir, there's something going on." Shouted Sgt. Baker seconds before a bright light followed by a thunderous roar, knocked 3rd Squad and the Platoon HQ to the ground.  "They're behind us!!"  went up the cry all along the front. 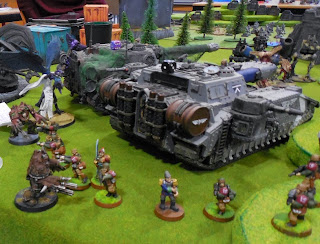 Almost knocked to the ground Col. Pallidar quickly regains his senses when as realizes that the enemy is now behind them.   "Quickly men, defend the armor!"  He shouts, urging his command team and the troopers around him to get into a supporting position.  He knew already that it would be a lost fight, there was no way his troopers could stop the beasts falling upon them. They just need to slow them down long enough for the armor to pull out and Astartes to move up.

"Pick him up you fool, don't just stand there."  Yelled Lt. Albertson of the 7th Scansin.  "I don't give a damn if I'm not part of your Regiment, your Colonel needs your help!  And by the Emperor so long as I'm assigned to your Regiment as a Liaison you will do as I ordered!"   The fight hadn't lasted more than mere seconds before the entire squad was killed, thought Albertson.  Looking up at the medics carrying Col. Pallidar away, there was barely time to pull the Colonel out of there before those daemons charged right by us. Where were the Astartes?  Why didn't they move in to assist?

"Joe... Joe... JOE!!!!" screamed Private Smith, before giving up and just hitting him upside the head.  Ever since those tread heads moved up into a position behind them, they couldn't hear a damn thing.  Even the ringing has faded away to silence.

"Signals, relay the following:  All Imperial forces pull back to Objective line Delta.  I repeat, All Imperial forces pull back to Objective line Delta!"  He'd heard enough though, Argos sat back in his chair as his command tank began to move off.  This did not go as planned, but better to pull back now than to waste more material and men in lost cause.  The situation was not getting better, and without being to bring his big guns to bear it wasn't going to.  We need to find out what was causing the blackouts and comms issues.  We need to find a way to counter it. We can't let this happen again, or the planet may very well fall into the arch enemies hands.

I was actually supposed to post this up a month ago, but never got around to finishing it.  Hope ya'll enjoyed the read.