Well as I've been working on my Chimera's the last month or so I've also been thinking about creating a Field Marshal for my army using the rules from Codex Daemon Hunters. There's a local group here that is starting a campaign and I'm planning on taking part in it. So now is the time to get him done, besides he will fit better into the new fluff for my army as I develop over the next month to fit into the campaign. The model is the old Macharius, I've removed the leaves from the helmet and added the plum. In addition the sash and accouterments are out of green stuff. 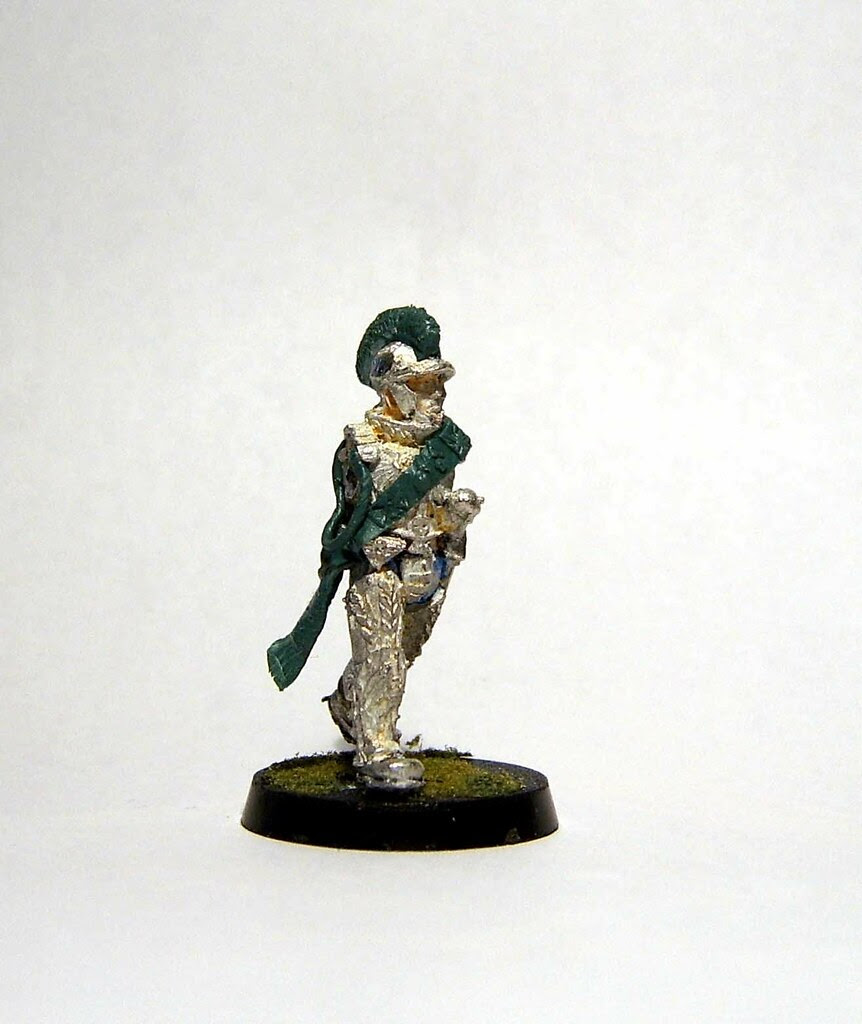 Posted by Marshal Argos at 1:58 PM No comments:

Well here's the latest update. It's been a busy week, so this is taking longer than I had hoped, but... Well I've got them pretty much done. I still need to finish the turrets, which I hope to do tomorrow. Unfortunately I'm going to have to arm them with Heavy Bolters because I don't have anymore Multilasers left in my bit-box, nor was I able to find any in bitz stores. Oh well, maybe I'll build a second set of turrets in the future.

As you can see in the first pic I've added the armor and rivets to the fronts of both Chimera's, but still need to do it to the sides. I ran out of rivets so I have to wait for the green stuff to set enough that I can start using it... 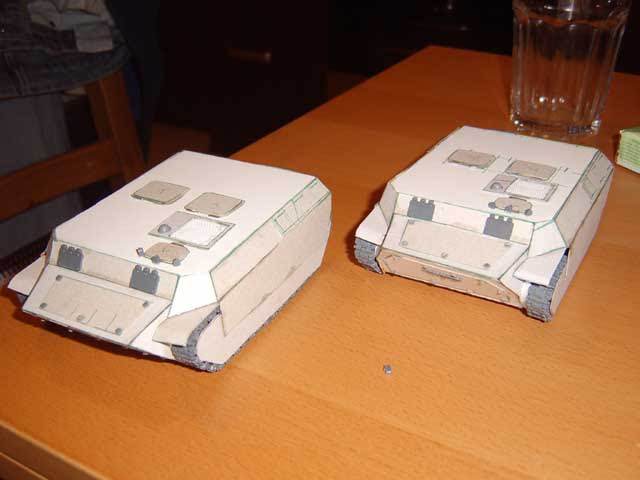 Here's a shot of the rear doors and front at the same time, I don't know why but it's one of my favorite pics... Egal, so tomorrow in addition to finishing off the turrets I also plan on at least getting the base coat put on, as I'm hoping to use them in a game on Saturday. Can't play with models looking like paper. 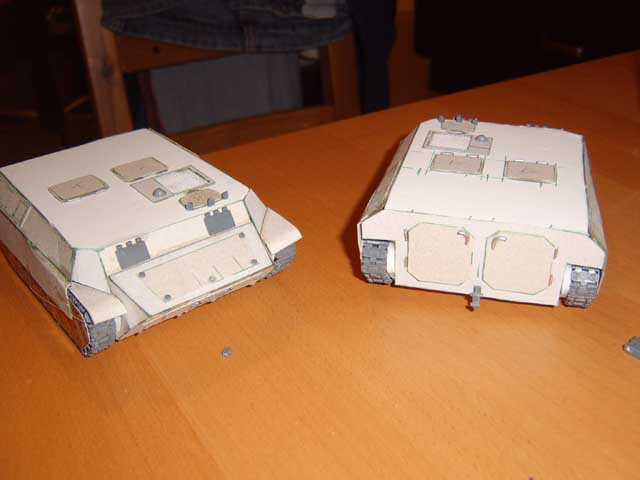 Regarding paper. Yup both of these, like all my scratch builds are done using cereal box and poster board. I know that my work is not the greatest, and for that reason I don't waste my money on plasticard. A cereal box works just as well, especially when you have to make pieces 2-3 times (I hit a quarter at 300 meters, but can't measure a 2 millimeters).

Well see ya'll next time.
Posted by Marshal Argos at 12:32 AM No comments:

Well I'm at it again, only this time I'm building 2 at a time. I really need to decide on a pattern name for these... Ideas anyone? After I'm done with these it's back to painting regular guardsmen for a while, as I still have about 50 to paint.

The first pic is just a shot of the track sections So it's not very interesting. I saved the templates from last time so this is actually going a lot faster than the first time. In all it took me an hour to get as far as I did tonight, whereas the first one took prolly 2 hours to get to this point. I've also used a heavier poster board for the roofs, as well as put support underneath. The first Chimera I built started to sag in the middle because of pressure as I pushed on it during the building process. I've also made the back a one piece instead of the earlier 2 piece design, and I think it looks a lot better this way. Well on to the pics. 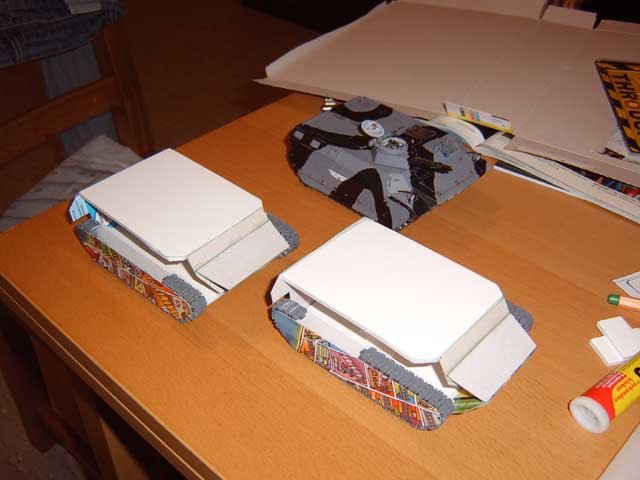 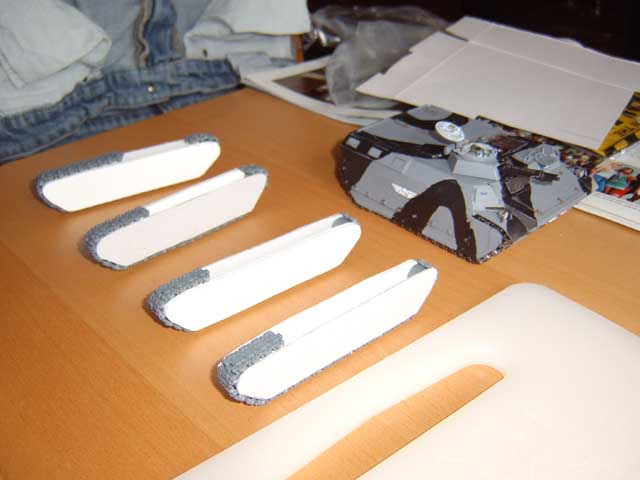 The roofs are made out of a thicker poster board this time, and support from underneath to prevent sagging in the middle. In addition they are larger and made of one piece instead of 3 like the original. 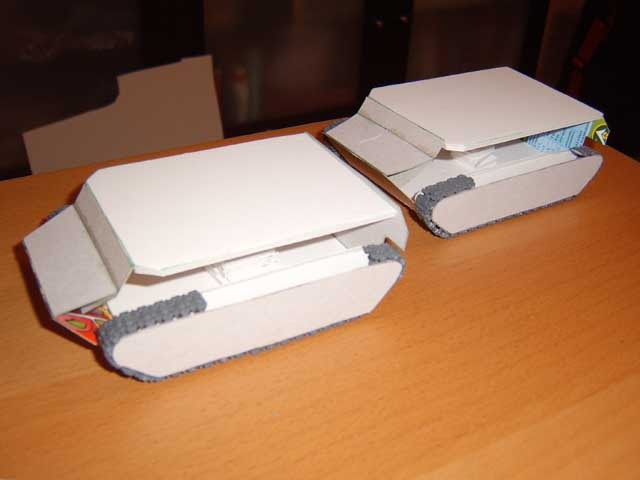 Here you can see the one piece back. Sorry it's a little blurry, I didn't notice it until now. 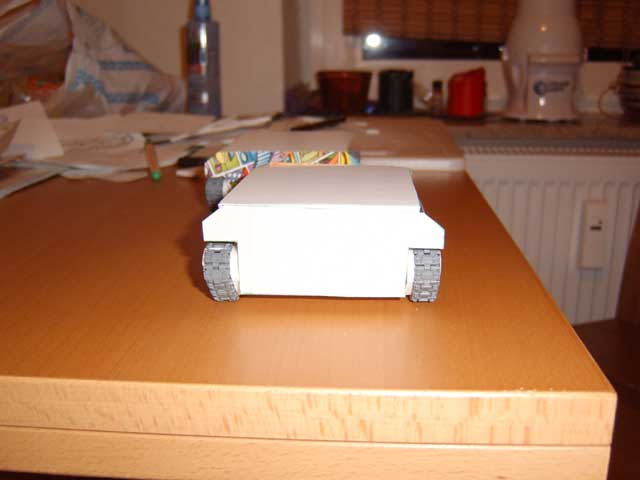 Posted by Marshal Argos at 12:34 AM No comments:

Well here's the latest up date on my Chimera. I started a little painting as you can see, and also added a few details. I tend to paint as I go instead of waiting till the end. For me it just makes things easier, as small details pieces don't get in the way then. Of course it also means that some things take longer... In this case I don't mind as I'm waiting on my Bitz order to come with the commanders head. 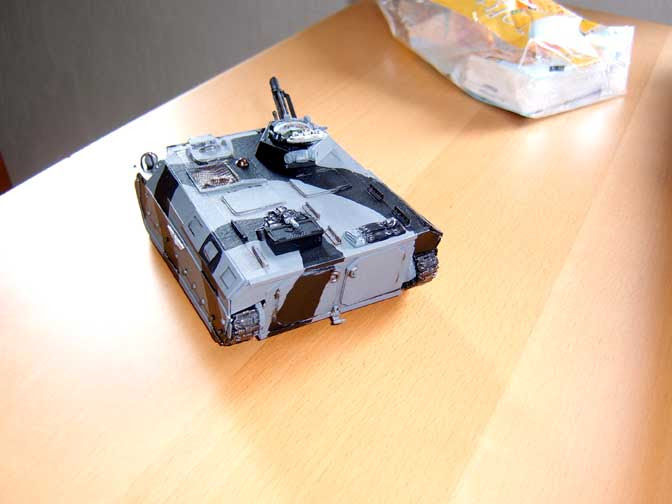 Well I added tie down points to the roof along with a little bit of gear. I'll prolly add more, I'm just not sure what, thinking of fuel cans etc... Also added hinges to the doors, and door handles. 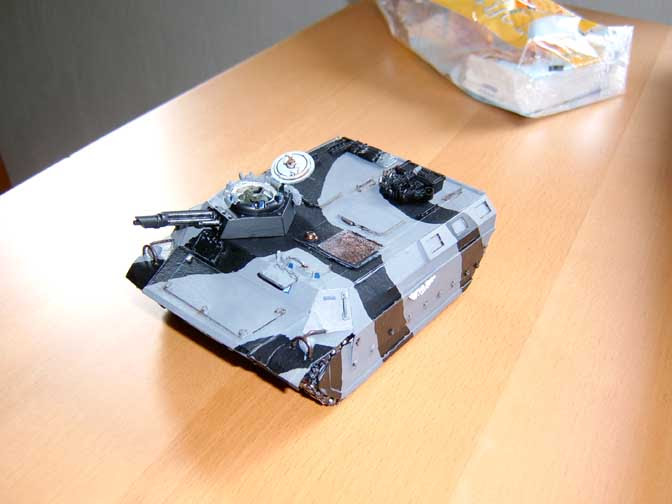 Front view showing pretty much the same as the rear view.
Posted by Marshal Argos at 11:23 AM No comments:

Well here's the latest update to the Chimera. Seeing that I'm home all day, I had plenty of time last night and today to do some work on it. So far I think it's pretty good, and the templates for it seem to work well. The 2nd and 3rd should be much easier to build using plasticard. 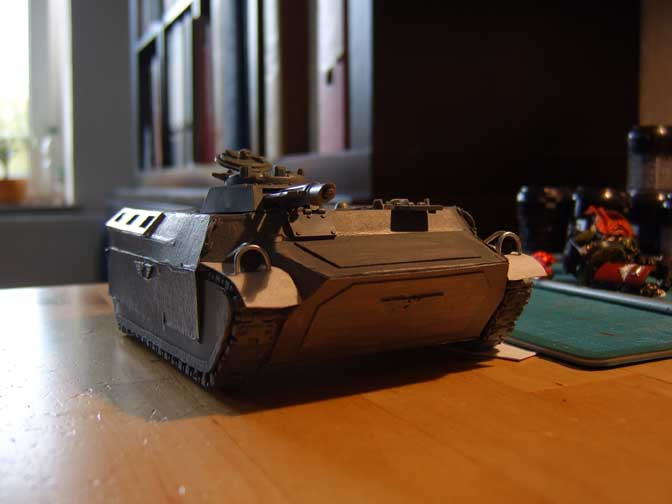 Low angle shot showing the front. I plan on painting the drivers view port under the armored flap, and putting rivets around the front and side armor as well. I'm actually quite happy with the way the headlight came out, but they are a little hard to see in this pic. 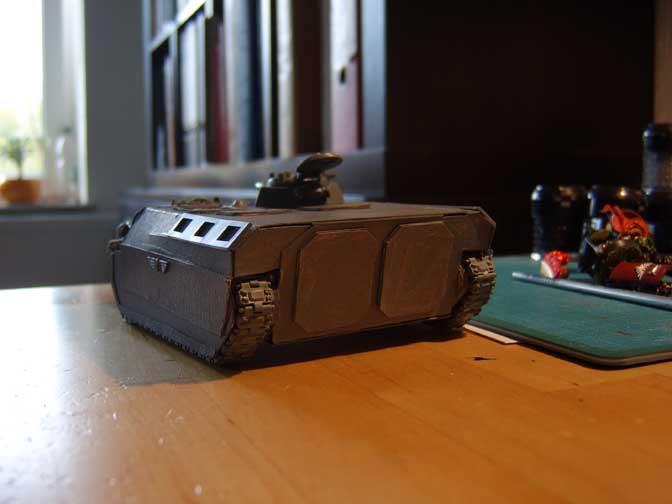 Rear view showing the troop doors. So far other than the doors I haven't done anything back here so expect more later. 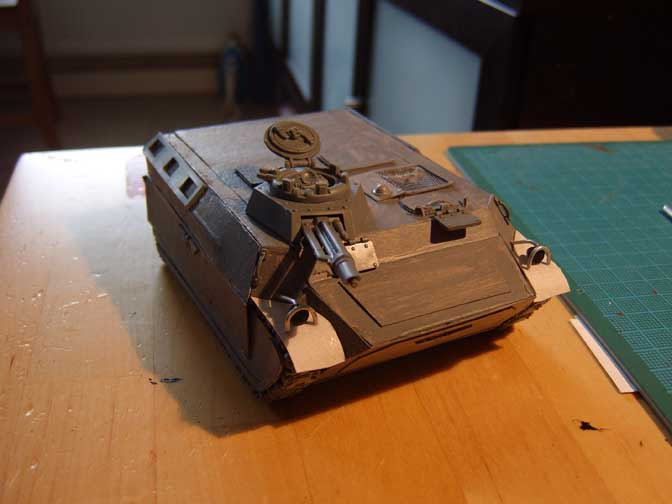 A view from the top, you can make out the engine compartment behind the drivers hatch, and the two troop hatchs just behind that.
Posted by Marshal Argos at 7:16 PM 2 comments:

Well now that the Stormblade is finished, I've decided to get started on a project that has been nagging at the back of my head for a long time. I'm building a few (3 to be exact) Chimera's but I'm basing them off of a Real world tank. I've always loved the look, so this will be my impression of it. 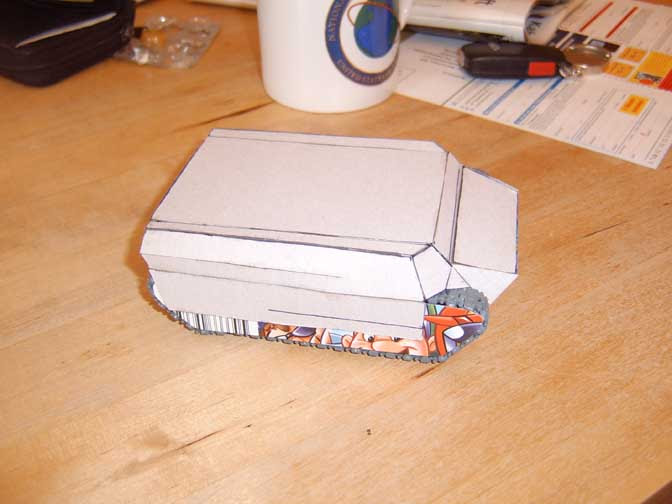 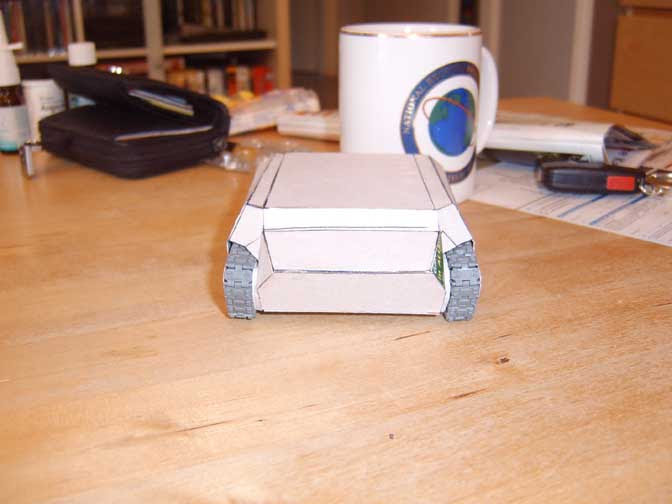 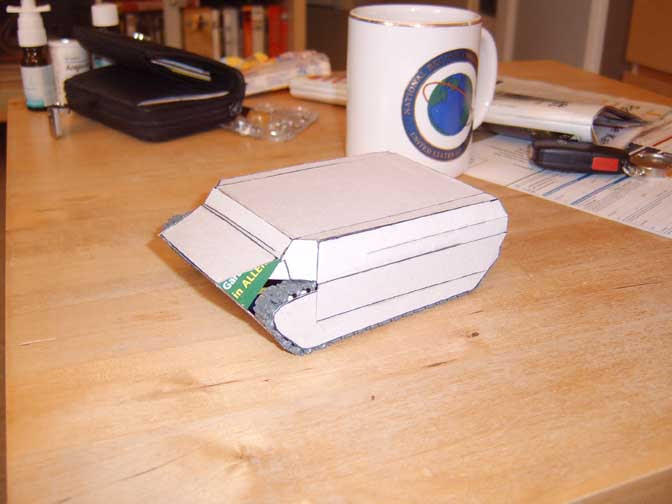 First one to correctly guess what it's going to be gets a cookie. :P
Posted by Marshal Argos at 1:01 AM No comments: