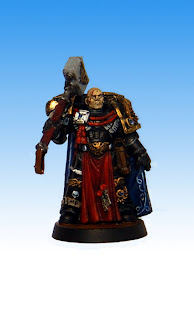 Well here's another of my Marshal's "Mordax", yes I have more than one, in fact I have 5.  The reason is simple really, sometimes I want them to have different weapons and when playing apoc I want to be able to field the Masters of the Chapters formation.  In Apoc he acts as the "Master of the Fleet", hence the blue robe, and joins the other masters with "Helbrecht".   I have to admit one of the best reasons for getting the Master's box set is just for the models (which look GREAT!) and because, in my case I can field 5 different Marshal's each kitted out as the mission needs.
As for the Apoc formation, I love using my BT in Apoc working in conjunction with my Guard.  Between the two it's a force of around 13K points, but the BT are the Alpha dogs.  I'll usually DS/Drop Pod/Outflank these guys behind the enemy lines and wreck Havoc.  With the addition of the special rules gained by the formation you can really make a force to deal with.
Well, till next time enjoy
Posted by Marshal Argos at 7:11 PM No comments: 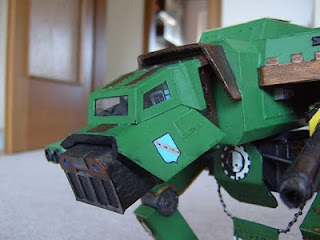 It's been a while since I put up some pics of the Warhound hound I'm working on, in fact it's been a while since I've posted anything...  Life just throws you a curve sometimes and you have to deal with it.  Needless to say I'm back, and spent a few days last week working on the titan.  Here's some pics to show what's been done.   I added heraldic shield to the head, and tried using a green wash to add shadeing.  I'm not sure if I'm happy with the shading yet, we'll see how it progresses.  Additionaly you can see the HUD I built inside the head, that was actually quite a bit of fun to make. 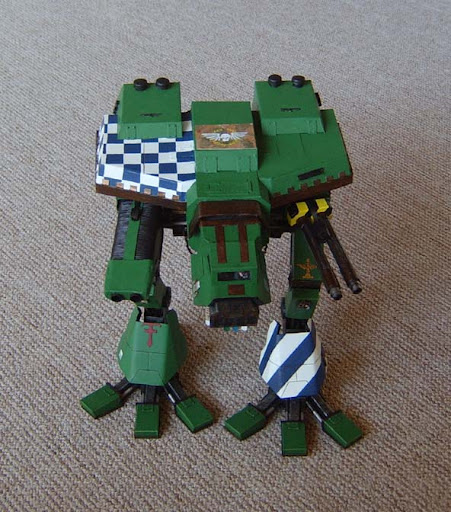 Here we have full view shot of how she's coming along.  The weapons aren't done yet, and neither is the body.  It needs at least 1 more layer of green, and then highlighting and eventually weathering. 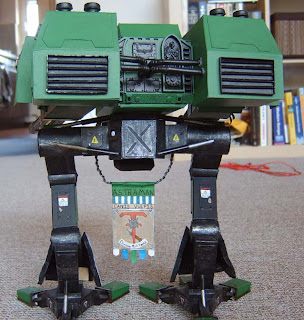 And last but not least a view from the rear.  Not much to see here, just places that still need lots of paint.  So yes, now that I have time to paint again, I decided to jump write in and finish one of the largest projects I have...  Maybe I should have picked something smaller to start with...   :)
Posted by Marshal Argos at 9:13 AM 2 comments: 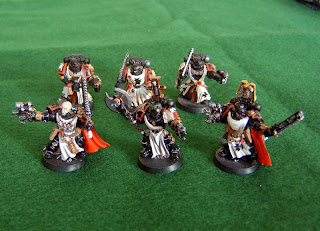 Here's my Sword Brethren squad from my now defunct BT army.  With the new Battle Missions book released I've been thinking more and more about dusting these guys off and bringing them out for a game or three.  As you can see they are a mix of models, only 2 are actually BT, the rest are either SM Sgt's or DA with robe's.

I loved these guys in games and always took them when playing above 1000 pts.  Armed with a PF and PW, and 3 attacks on the charge they really could deal out some damage.  Throw in Furious Charge and you suddenly had these guys I5 and S5, more than enough to kill most enemy's including special characters.  You can even go that extra mile and give them all Terminator Honours and they jump up to 4 attacks on the charge and 3 in a normal round of close combat.  Ah yes, those were the days of hacking and slashing your way through the enemy.

Additionally when points were available I'd give them a Razorback to help get them into CC faster, equipped with twin linked HB's, extra armor and smoke they were guaranteed to get into the enemy lines awfully fast.
Posted by Marshal Argos at 10:44 AM No comments: 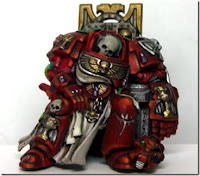 Well, after seeing pictures of the new BA models I hereby declare them "Traitorous Extremis Diabolus!!!"   What manner of warp spawned creature would have wings growing out of their back.  I could understand Sanguinius as he was a Primarch, but now...  I mean ever 2nd BA character appears to have them.  Monsters, Deamons, call them what you will, but they will no longer be accepted in this army's theater of operation.   I shall make it my personal goal to destroy those blood drinking, wing sprouting deamons and I shall not stop until they have all repented and cut off those damn wings.


Anywho, I like most of the models, but the wings, I think you already know how I fell about them.  "Brian" if your out their reading this, sorry bud I know you always loved the BA, but they're gonna have to die.

Also on to more interesting topics.   Played my first mission out of the new Battle missions book last night at my LGS, it was quite fun even if it was an Imperial defeat.   More on that later, I have to sit down and get the photos uploaded.
Posted by Marshal Argos at 9:26 AM 4 comments: