Well she's done!  I may still put on another clear coat but I haven't decided yet.  The weathering isn't the best, but better than some of my earlier attempts at it.  Hopefully the clear coat won't take to much of it away.  I've had that happen on a few other model's before and didn't enjoy having to go back and do another coat of  "weathering" on top of the clear coat.

Before you ask, I picked out some of the details with paints, didn't really use a lot of washes this time, and mostly I used those on the back where the engine is.  The rest of it was done with weathering powders and different types of brushes. 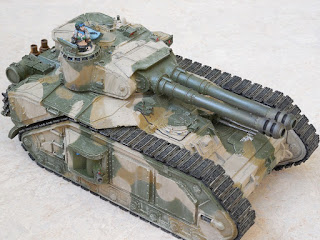 I've decided on a name for Commander "Lt. Deering", and I've started on a bit of back ground for her as well.  But one thing I realized was that I didn't have a name for the Mach itself.  The one that seems to stick in my head the most is simply "Thunder" but we'll see how I feel about that in a few days. 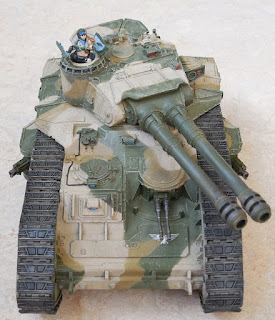 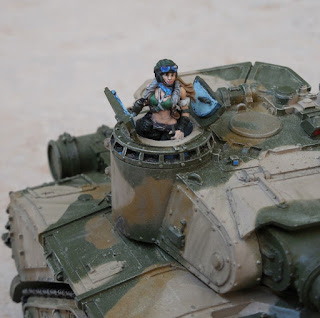 And above you can see a close up of Lt. Deering riding the Copula. Nothing like checking out the enemy with your own eyes before blasting them to pieces.
Posted by Marshal Argos at 5:30 PM 5 comments: 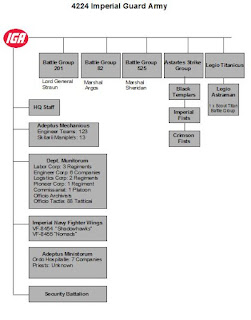 Well I promised that I would put this up a while back, but things just haven't been going like I would like so I'm just getting around to doing it now.  To answer "Zzzzz's" question "I note that the BG HQ functions could be described as another battalion. Are they one cohesive unit or are they drawn from the BG's constituent units ?"  I'll have to provide a bit of background for how Sub-Sector Command is organized out here on the fringes of the Veiled Region.

So in my little part of the Galaxy, there is constant war with the planets on the edges of the Veiled Region constantly under attack by enemies of the Imperium.  Because of this many Regiments that are raised don't leave the Sub-Sector and typically receive reinforcements every 2 years from the core worlds of the Sub-sector.  To ensure that the Battle Groups and Army Groups are staffed with experienced staff the Officers are assigned to Battle or Army Groups as permenent staff.  The Commander of each Group is free to pick is own staff, the Regiments that are under his/her command are moved around at the will of the Sector command.  Always there where they are needed most.

What that all means for my fluff is that a Battle Group consists of pure combat units.  All of the assorted "support" elements come for the Army Group level.  Now there a always a few support units assigned to a Battle Group, such as cooks (the staff has to eat you know), clerks, medics, etc... but only enough to get them by.  Most of the support work load is handled by the dedicated units at the Army Level, and can be sourced out to the different Battle Groups as needed.


* Sorry about the IGA logo, I'm from Wuh'Scaahnsin, and we always had to hit up da IGA on da way up Nort'. 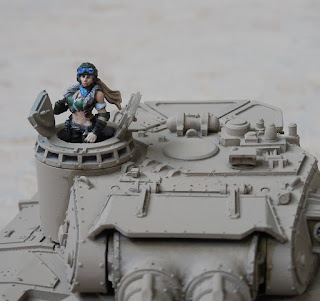 So here's a bit closer shot of tank commander.  The one below was taken on a different day, and really didn't come out so good, but it's the best I could do under the weather conditions.  I'm having a hard time deciding on a name for her, so far the choices are
Lt. Thrace
Lt. Vansen
Lt. Deering 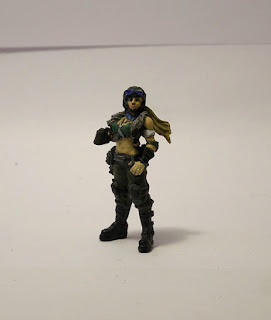 The model itself was a blast to paint and I really enjoyed working with it.  The resin and details are superb, and there was hardly any flash, or deformed parts. GW better start paying attention to all the other companies out there, as many of them meet or exceed GW's "standards".   Once I have a name for her and the tank is finished I'll put up her fluff. 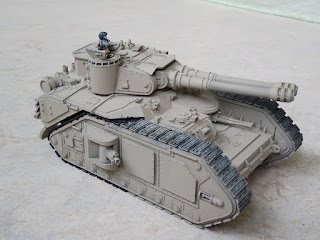 So after the shading from last time, I added the second layer, and finished up my Tank Commander.  No closeups of her as I'm planing an individual post for that. 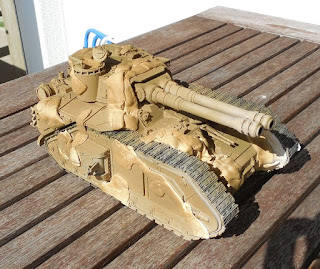 After that I covered the model in "UHU Patafix" adhesive pads, you don't have to push it down into the corners but make sure that you've covered all the areas that you want to keep the original Beige color. I supposed you could use silly putty or something along those lines as well.  It took a bit to get it all covered but it was well worth the few extra minutes.  After that I sprayed her with an "olive brown", and let her dry. So, once the first two brown's are dry, add another layer of adhesive pads on all the parts that you want to keep with the darker brown, but don't remove the first!  As you can see I then sprayed again using Olive Drab.  Now it's time to kick back, let'er dry and enjoy a cold one. 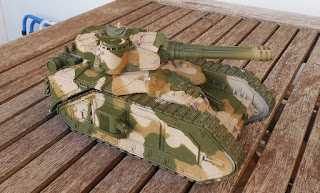 And now we have the finished (almost) product.  I had to go back and tidy up a few spots where I sprayed to heavily and there we a few places where I jammed the putty to hard into the cracks.  But all in all I think I'm allowed to pat myself on the back.