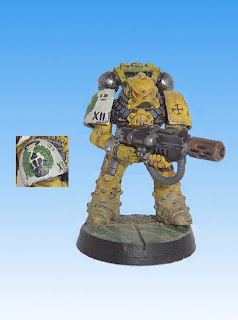 Another fist is done.  Actually he's been done for a while now, I just haven't gotten him posted up yet.  This brings the number of completed fists up to 4 with only 2 more to go  :)  to finish the squad.    I trimmed down the ridge on the shoulder guards to give them an older look, and made sure to use one of the old backpacks as well.  I really tired to give the base a marble affect, and although I think it looks good I'm not sure if it's marble.  I'd love to give credit to the company who made them but I can't.  I found them in an unmarked bag at the bottom of a game store in Cologne on a recent trip there. 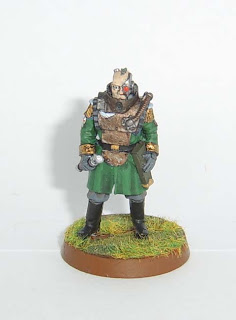 I picked this model up at Games Day Germany a few years back (2 I think) and have had him sitting around since then.  I tried painting him once before but just couldn't get him the way I wanted.  Recently though, I started scratch building a Warhound titan seen here. Canis Vulpis She's still a work in progress, and one I hope to get back to real soon, but while painting her I decided to give this guy another go.

I tried doing him up in the colors of the Legio Astraman.  In game I have no idea what I'll use him as... maybe an adviser of some sort, we'll see what comes to mind.  Once the Titan itself is done, he'll prolly go on the base.
Posted by Marshal Argos at 6:27 PM 2 comments: 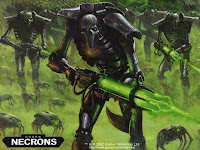 Having been notified of unknown movement reported by ground sensors strewn out to cover their the flanks BG-82 Command dispatched elements of the Mike Company 313th supported by artillery and armor support from the 73rd Armored Regt.   Arriving at the coordinates, Cpt. Holdt saw the reason the sensors were activated... "Necrons" he thought.  He immediately went about emplacing his support squads and armor, but there was little time before the C'tan lord charged into them.  "Bring it Down" he ordered, "I want everything we have on it until he's dead."  Cpt. Holdt was a firm believer in the theory of  shoot the big one's first.  Especially if they charge you.
Missile after missile flew into the floating horror coming at them. Artillery and tanks shells exploded sending geysers of dirt in the air, but onward it came.  Holdt's infantry squads had no time to get into cover, for their heavy missile launchers were needed from the start.  With an ear splitting WHALLOP a monster of an alien tank appeared directly in front of them.  Thunderous lighting leapt out at the armor supporting them. 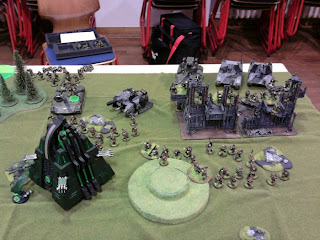 "Infantry this is Armor, we're still here" vox'd Sgt. Brown "But those two are inside our Arty limits"."Thunder 1 and 2 moving to fire directly, Whistler engaging targets in the forest".  Cpt. Holdt new he had to kill the C'tan and enemy tank if he wanted to get out of here alive.  "2nd Plt. swing right and see if you can't outflank these fraggers" he yelled across the comm bead.
Scant minutes later and the C'tan disappeared in a flash of light and being hit with plasma gun from 2nd Platoon's command team.  One down thought the Captain, if it hadn't cost us 20 something troopers to do it, it might have been worth while.  If we don't take this tank down quick we're done for he thought, as his heavy weapons teams fired once again. 1st Platoon was almost gone, 2 squads, 20 troopers... If it wasn't for that damned damned enemy squad that appeared from nowhere thought Cpt. Holdt.  Suddenly "Command! Command! this is Lt. Brewer.  We're gone sir, there's only us left, 1st.. 2nd squads wiped...  We're g.....  aaarrrrrrhhhhh....."  and then only silence.  That's it thought the Captain, it's time we bring the fight to them. 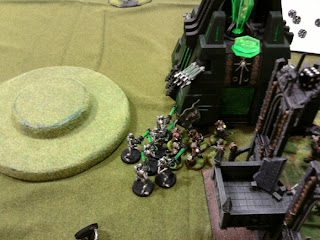 With no officers left alive it was up to Sgt. Wilson to get what remained of the company out alive.  He still had 20 men with him, his squad and 2 heavy weapon teams.  Throw in the armor that made it and we just might be able to make it back he though.  He still couldn't explain it the enemy had them, and suddenly they all began to just disappear.  It was eerie, the silence they left behind on the battle field.  Wilson new they lost this fight, what with more than half the company killed or wounded, and all it's officers dead, but some had survived and those survivors would continue to fight and die for the Emperor. 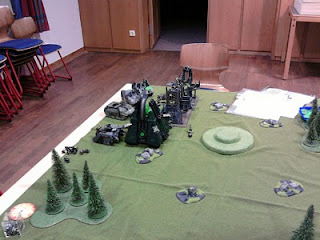 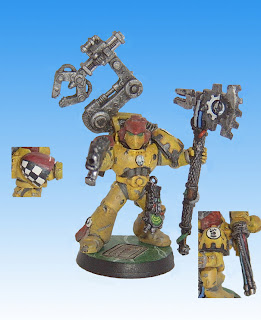 The next of my 6 Imperial Fists.  Still working on this battle damage and weathering idea.  In the past I'd just paint and go, but in the name of progress, or just getting with the times I've decided to start paying attention to the little details.  Next post I'll put up some comparison shots of my mini's from 12 years ago...

Here's an advertisement for anyone in Germany.  There is a pretty good Gaming club in Gutersloh and they meet every Friday evening.  I've been over there twice now and have a blast in both games, not only do they have plenty of terrain and table space, but quite a few speak English so for those that can't "do the Deutsch" it's not a problem to get a game.  Here's a link to their site if anyone is interested  GT-Battlezone
Posted by Marshal Argos at 12:25 PM No comments: 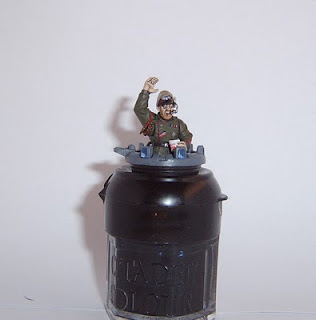 So I waited how many months until GW released it's Knight Commander Pask model only to be sorely disappointed.  That said, I decided to do my own with the results posted above, I'll leave the copula of my next Russ unglued so that I can swap out Pask as warranted.

A 12 year veteran of the 73rd Armoured Regiment Vet. Sgt. Knebel has 168 confirmed kills, more than any other tanker assigned to the 73rd or those in the battle for Arcturus. Although a lowly trooper Sgt. Knebel is highly regarded by his superiors for his skill and dedication in destroying the enemy. He has worked his way up from the ranks filling ever position from driver, to loader and gunner; if not for his renegade streak, Knebel would have received a field promotion to the officer ranks many times over. Instead he is content to command the Leman Russ "Tigers Eye"
Posted by Marshal Argos at 11:21 AM 2 comments:

tschja, what can I say, I played a 1750 point "Dawn of War" mission, and stupidly chose to go first...  meaning that I wasted my entire first round of shooting.  The Imperial Navy scum attached to my army actually did something for once, and made sure his flankers came out on the wrong side (for him) of the board.  I screwed up my flank defense (which just about cost me the game) and the 'nids rolled along the board edge to my objective.

This was quite literally a fight to the death as I threw everything I could at his 2 Trygons raping my objective.  I pulled out a last game (6th turn) draw by the skin of my teeth and the bravery of a lowly LT who stood his ground while Battle Cannon and Basilisk shells leveled everything around him.  Seeing the giant Tyranid "Alpha" still alive he pulled out his Plasma pistol and shot the beast in the head to secure the objective.

I'll get pics posted once I get them and a more detailed battle report typed up in the next few days.
Posted by Marshal Argos at 10:14 AM No comments:

Hello gents,
I just want to relay a sad experience from last week. You see, I set out to play at a new club in a city nearby and ended up playing a 2000 pt game against Chaos. In total, my list looked something like this.

I'm not sure on his list. But I know he had a Vindicator, and LC Predator, 4 squads mounted in Rhinos, and a HQ Squad mounted in a Rhino. I stole the initiative and got to go first, moved most of my Inf up 6" and promptly destroyed a Rhino and the Vindicator.

In his turn he moved the now dismounted squad to cover, and moved the other 4 rhinos up and popped smoke. Now is where things started sucking!!!

I dicked up my turn by giving my orders to my 2 ML squads, and then (here's where it got bad) instead of shooting with my tanks/arty I just continued on shooting with my Inf. You see I had just shot with 2 ML squads and just seemed to go with the flow and stay with infantry squads, BIG MISTAKE! In total 3 of my 6 Plasma gunners killed themselves, and not one did any damage. So, now it's time to shoot the big guns, and of course they knock out NOTHING!! Yup, he made every one of his cover saves due to smoke....

See where this is going? At this point he dismounts, moves six, and assaults six, and half my army is now engaged in CC... and we all know how good IG does in CC.

Moral of the story. Pop the damn transports with your armor and heavy weapons BEFORE shooting with your infantry squads. This is common sense and every commander should know this, but in the heat of the battle you need to keep a clear head and stick to the plan...   I'm sure there's other points to be made as well, but I really think this was the biggest problem I had.
Posted by Marshal Argos at 11:02 PM 3 comments: