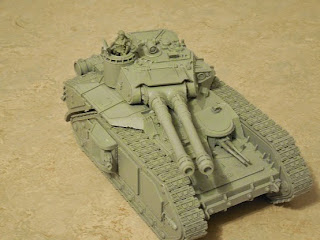 As promised long ago here's an update to the Macharius Vanquisher.  As you can see it's not much, but it'll show that I'm at least going forward. 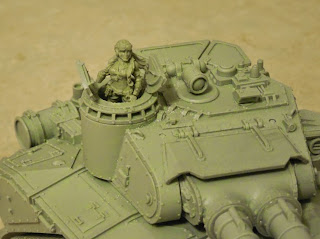 The commander is "Tank Gunner Ash" from Raging Hereos, to get her to fit I hat drill out the commanders hatch adding about 1cm in depth.  Well worth it though as I can remove her (yes her legs are still on) and always use her for something else in the future.  At some point in the coming days/ weeks I'm  gonna have to do up some background for her. 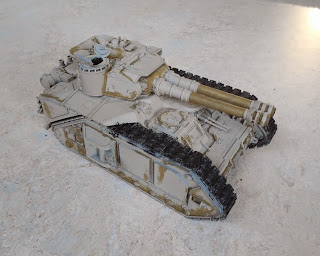 An a picture of the primed tank.  Primed dark grey, and then 2 light coats of a sand color.  Then I did a bit of pre-shading, and the tracks.  Well that's all for now, more in a few days when I get back from our short family vacation.
Posted by Marshal Argos at 5:30 PM No comments:

Email ThisBlogThis!Share to TwitterShare to FacebookShare to Pinterest
Labels: Vanquisher 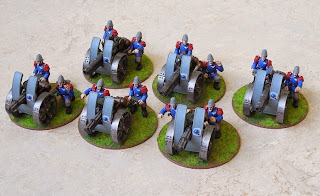 Here's the first finished heavy weapons teams for the 7th Scansin.  The weapons are just clipped in so that I can swap them out for Las-Cannons if need be.  In total I plan on doing up 2 more Teams, but those will be static Mortar teams and won't be able to swap the weapons.


The models themselves I purchased through a Kickstarter from Curious Constructs. They are now available for direct purchase from the web store as well, as I have picked up a few extra pieces for the ones that I have. As I mentioned in some earlier posts, the models were great, easy to prep, and a joy to paint.
Once I get a bit of time in between getting the Macharius done, I'll start work on the other weapons for these, along with the Mortar Teams.

"Commander, we have just received word from Group, the assault team Alpha to the east has failed.  The bridge is still intact, and in the hands of the enemy!"  Parallel to the attack on the bridge, assault team Dagger was assigned the task of seizing pumping station 436-X10.  Installed at the joint of 3 Rivers, the pumping station was not only vital for the forces of the Imperium, but tactically vital as it would prove to be a stable FOB.

Elements of 3 Regiments along with Air support were assigned to the mission.  Elements of the 313th dropped in advance, with elements of Armor and light infantry moving up for support.  Loitering air support was highly effective, but the enemy deployed an unusually high amount of AA guns.
Already in the opening phases of the battle, Infantry elements along with light armor support had moved up to seize the pumping station, while light Infantry and heavy armor moved to secure the bridges and defend the flank.
"Sir, we've got incoming enemy air support heading to the target.  Shall we move up in support?" Called the radio operator.

"Damn it, we just lost the bridge, it'll take to long to re-take.  Order the armor up to the river in fire support.  They should still have range on the target and will be able to provide fire support from there."
As Ogryn's poured from the wrecked Valkyrie, the Infantry holding the pumping station attempted to dig in just a little bit deeper.  Ogryn's were well known for the lack of intelligence, but on the same hand treasured for their singled minded purpose in close combat.
After chewing through the first line of Infantry, the 313th retreated deeper into the pumping station.  They only needed to hold out until sun set.  At that point the Ogryn's could be killed in their sleep as they laid down there weapons for "nighty night."
Only smoking craters, red graffiti, and the odd piece of kit was to be found, after 2 Multi-Lassors, 4 Heavy Bolters, and 2 Exterminator Cannon's fired upon the last 2 Ogryns's.

Well much like the previous game, we came up with our own scenario and rules. The river was impassable for Infantry, Dangerous for all vehicles that weren't amphibious.  Only the central bridge in the middle, and the bridge joining the two deployment zones.  Objective was the Pumping station and holding on to it.

I think the pictures explain what happened pretty good, but just a short one liner.  I Won, but I did it in the bottom of the 6th, with quite literally my very last shots from an exterminator.   If I hadn't managed it, I have no doubt that I would have lost in the 7th turn.

Twas a great game, and once again I had a blast! 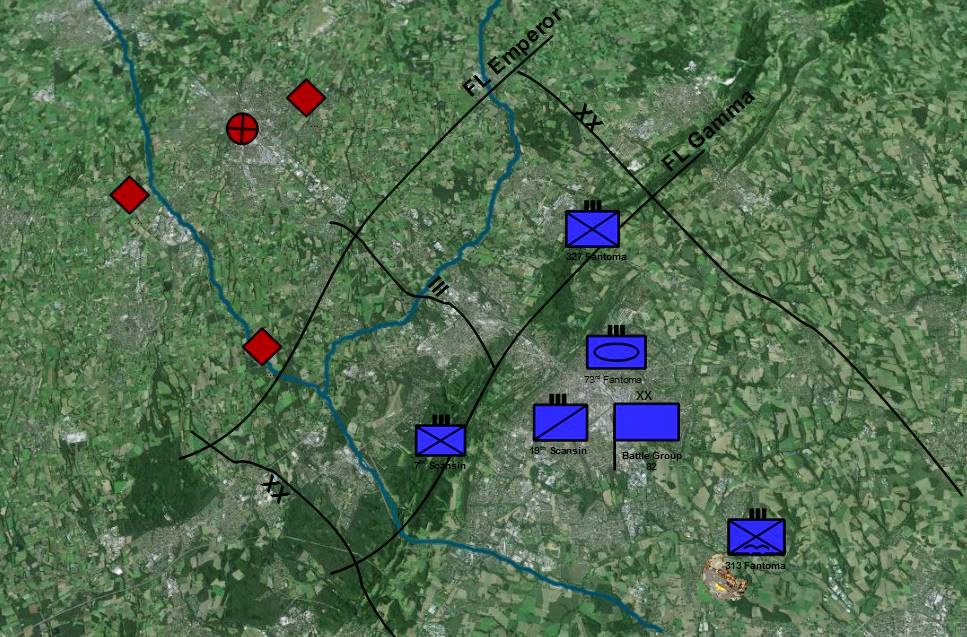 Sir, as you can see the 327th Fantoma and 7th Scansin have moved up and secured the ridge line.  Elements of the 19th Scansin have begun sweeps of the area to our front and also patrol our borders with the other Battle Groups.  73rd Armor is supports both of the forward Regiments and has secured our area to the rear with 4 Companies from the 313th.  Two Companies of the 313th has been arranged into a QRF 1with the ability to deploy anywhere in our AO with 30 Minutes.  The remainder has been organized into a RF 2, and can deploy within 2 hours.  The elements that are not currently involved in operations are on standby and can be used as you wish.

As part of the defense Avenweddon Marshal Argos BG82 was ordered to move up and secure the western flank, Marshal Argos immediately seized the Ridge line to form a natural line of defense.  With the ridge under control, BG-82 set out to secure a number of bridges and infrastructure targets before the enemy was able to destroy them.
Elements of the 313th DTR jumped in ahead of the main force to secure a number of vital objectives prior to the attack on the bridge.  Forward elements of the 7th Scansin and the 73rd AR, moved up in support before gathering for the main thrust.

The main force was required to secure the bridge, and detonate it from the other side.  Below the Imperial Square Monument were the control's to detonate the bridge.  This was to be considered the last resort, but within the first hour of the engagement was already being undertaken. 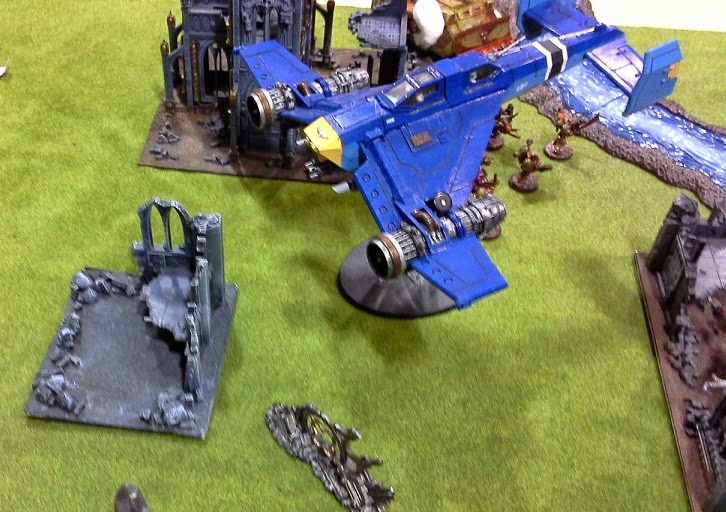 Air support was called in, and successfully took out the Chaos lord, along with a Daemon. Untold traitors meet their end under the fiery blaze of the Avenger's Gatling cannon. 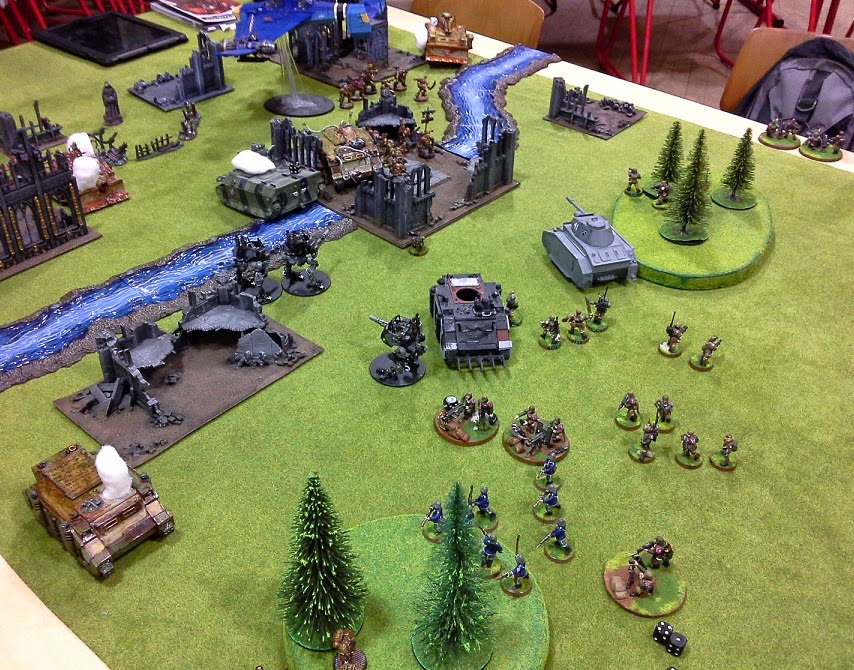 A single Chimera was able to cross the river and charge on to the secondary objective.  The rest of the assault force was scattered on the eastern edge of the river, unable to assist, and still pursued by traitor marines. 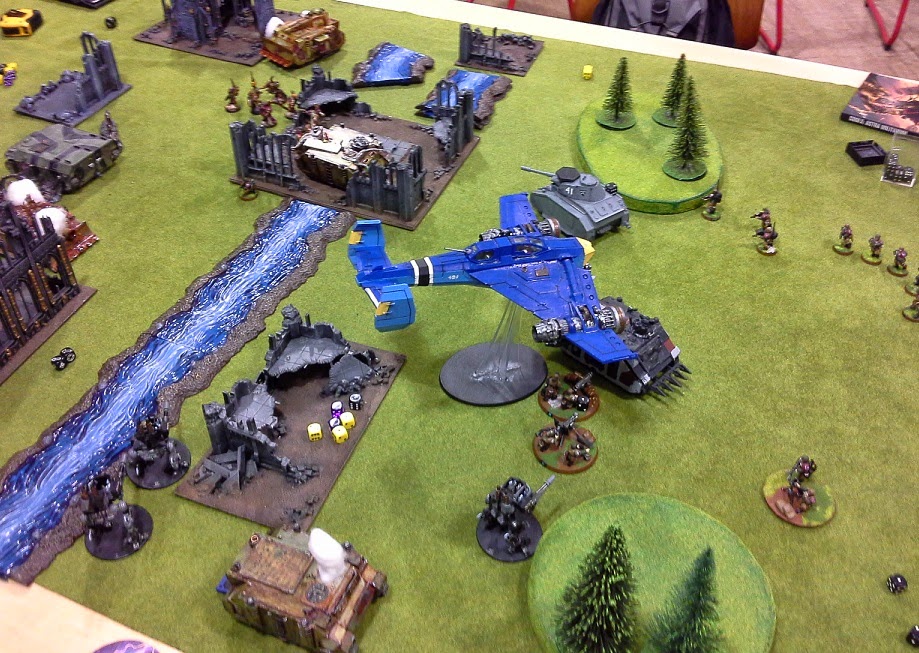 In the end I end the traitors were able to contest the objective, and as the sun set upon the battlefield the bridge still stood.  The assault force pulled back under cover of darkness, collecting their wounded along the way.  Although this bridge was lost, there were more important objectives that had been secured that day.

I had a great game a few weeks ago, and realized I never posted this.  We pretty much just made up our own mission, objectives, and deployment zones; and then went out about crushing each others armies. I had a great game, even though I lost, it was the most fund I'd had in a long time.  I've got a couple more posts along these line, I just need to get them all typed up.

Well as some of you may remember I won a Macharius Vanquisher a while back.  Original post here Up until now I just haven't been able to find the time to get her done, but over the next 3 months I should have more than enough free time do finally do it.

Here's the current progress as of today. 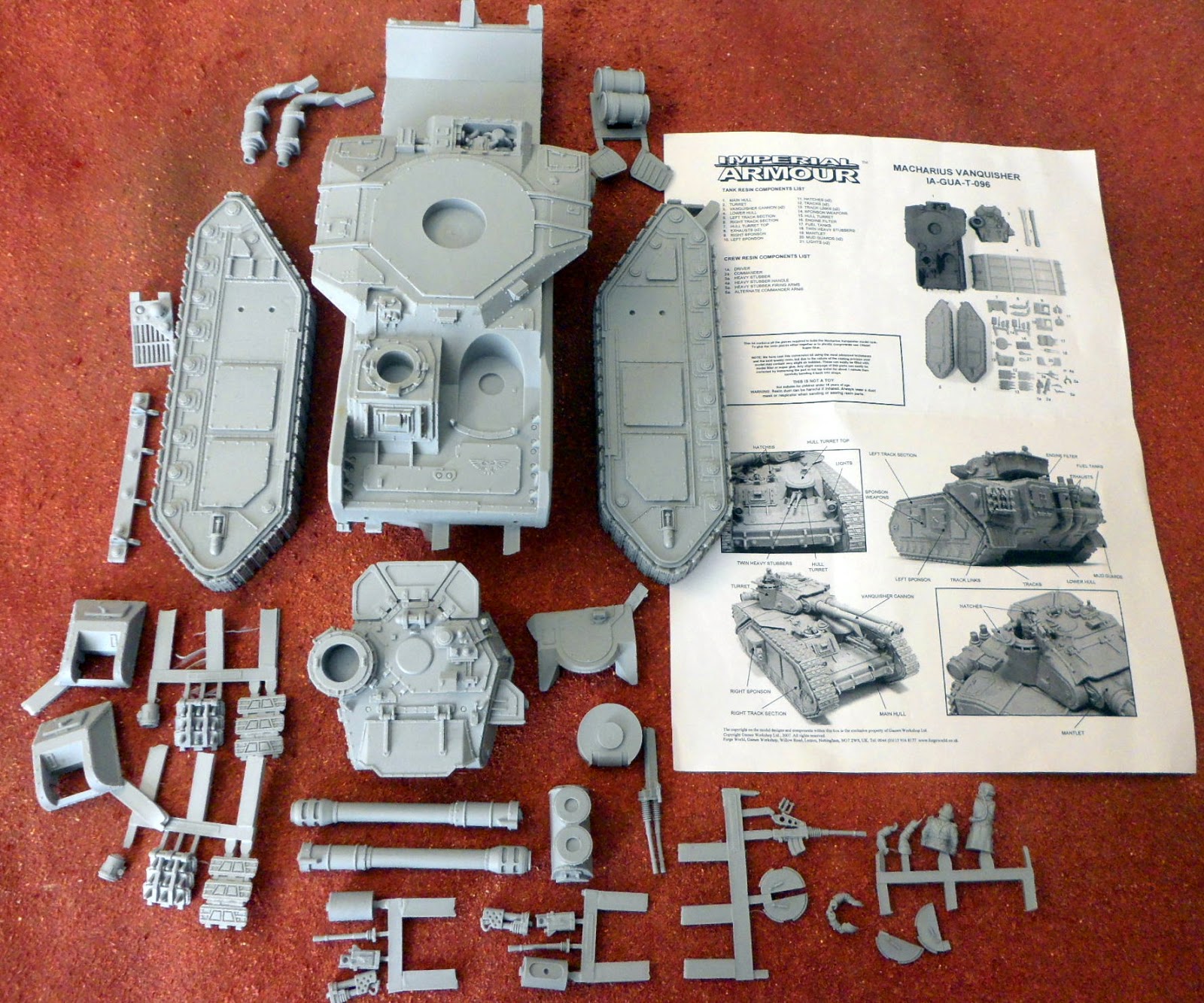 The big push though came from the painting competition over at Bolter and Chainsword.  So I've pledged my Mach and now I have to finish it.
Posted by Marshal Argos at 5:30 PM 4 comments: