Well I had a couple of hours today to do some painting, and below are the results. The pics didn't turn out as well as I wanted them though and to be honest I don't have the time now to go back and retake them. Here's hoping to good weather tomorrow so I can get new photos. 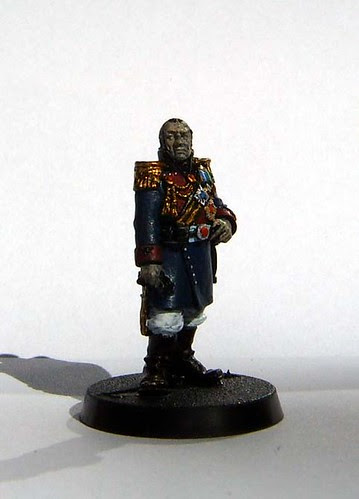 So seeing that I was unable to decide where to go with the colors I started digging around old photographs and painting of Russian generals in the 1800's. The paint job so far is where it has lead me. 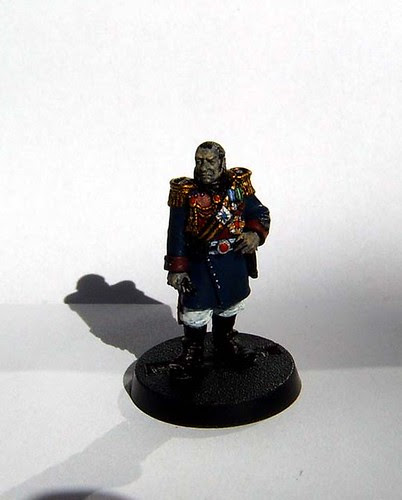 The white pants need to redone... My white was a little thicker than I wanted so it's been thinned out now and I'll finish that part later. The face and hands only have base colors, and I still need to go in and shade a few of the ribbon/jewels on his uniform. The base is only temporary until I decide how I want to base him for good.

Posted by Marshal Argos at 5:12 PM No comments:

Well with GW releasing the new Advisors a while ago, I just new that I wanted to turn the Navel Attache into my new Marshal. Now I'll finally have a Mini to represent Marshal Argos on the table top. Eventually I plan on creating an entire HQ to go along with him but for now I'm happy with how he's progressing... 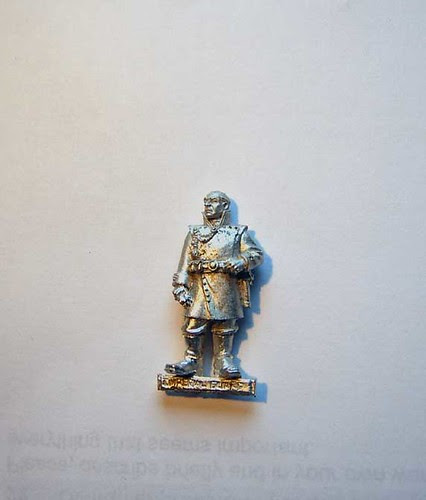 The first step was to remove the Aquila and misc item from the tunic, I really liked this model as it was and didn't want to change to much. About the only thing that I wish I could have done was shorten the tunic just a little bit, but that would take way to long, and besides, my skills are not that great. 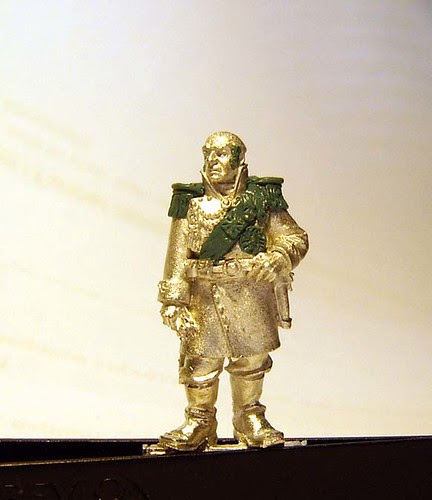 So from top to bottom, I added a little bit of a side burn just to give his face a different look. Next up was adding the sash and was probably the easiest as It's just a long flat strip of green stuff . After the sash was added on I went in and did the Epualettes using this Tutorial by Col. Gravis. I have to admit following that Tut was one of the easiest things I've done in a long time and it was absolutely easy to do. In the end I think they look great and give him just look he needed to show that he was going to be my Marshal. 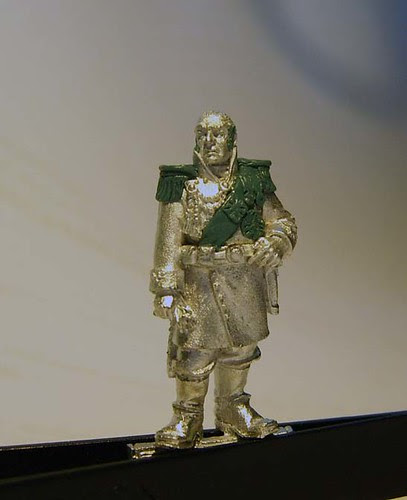 After that it was just a matter of adding a few awards and decorations and he was done. I think the hardest part is going to be deciding on what colors to paint him up in. I've been thinking about dark blues almost like the old Napoleonic uniforms. The thing is though is that I need to have a colors that look good on him and yet still fit in with the rest of his command squad later whenever I get around to doing them.

*** Oh, and there won't be any update to the Inquistor from the last post because I seem to have mis-placed him while cleaning up my desk last week....

Posted by Marshal Argos at 7:57 PM No comments:

Well I finally got around to basing my FAO this weekend. With that process done "Maj. Niven" of the 73rd Armored Regiment is finished. Now I just have to wait until the glue on the base dries and he'll be spirited off into the black case of stagnant death, otherwise known as my carrying case. So named because I haven't had a game in almost a month (more on that in a later post), but enough of that lets move on to the pictures. 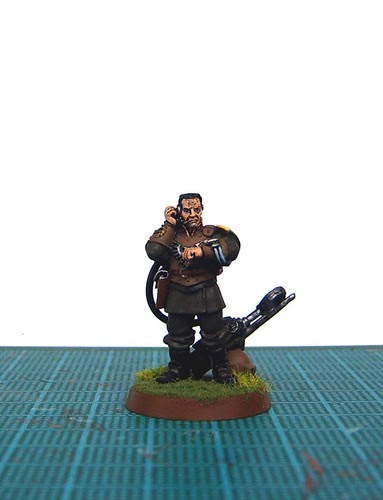 All things considered I didn't really spent a lot of time on this guy. He's not my General, nor a major leader in my army. In fact I'm not really sure if I'll use him outside of Apoc games. 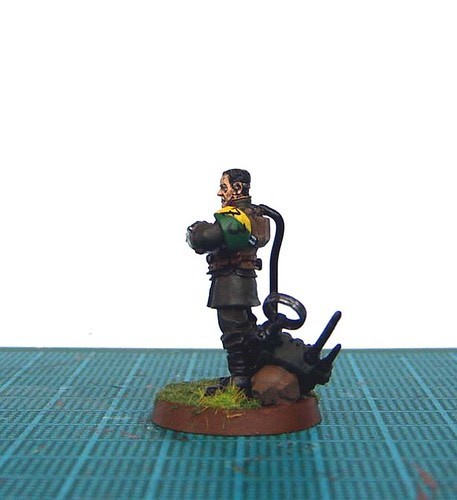 I like this model, but don't like the rules for him, last edition I had a model painted up in the 73rd's colors in my HQ as well, but only for fluff reasons as an Armored Liaison officer. Maybe I'll continue to do the same thing now. Ah yes, the famous 73rd Unit markings on his shoulder. 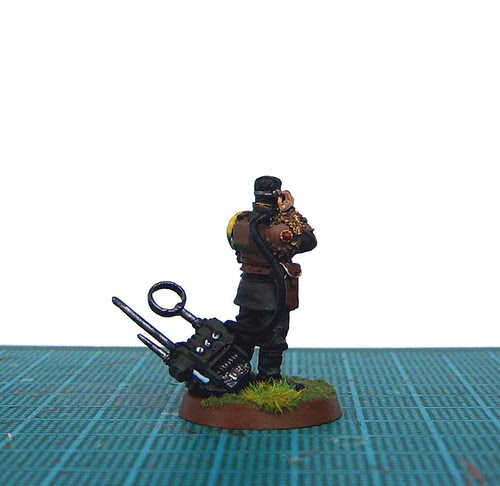 And his fancy dancy radio. 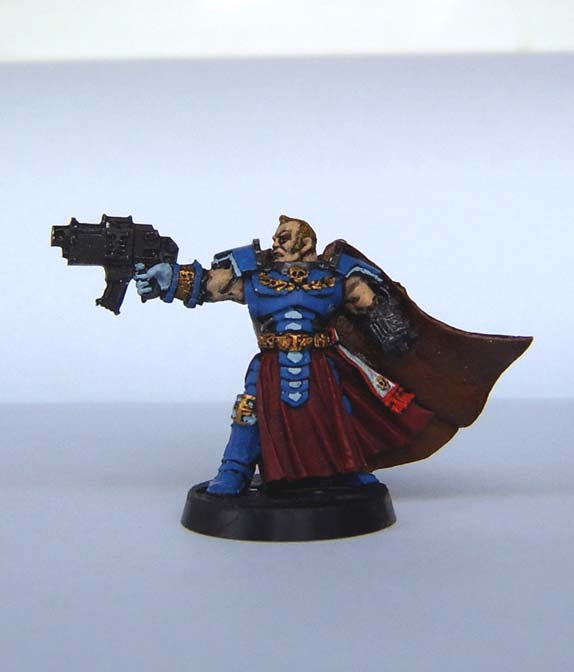 Ooooohhh... Aaaaahhhhhh.... That's right, here's my Inquisitor and he's blue. I always liked the artwork of Inquisitor Hand, so I used it as inspiration for this guy. He doesn't have a name yet, nor is he finished, the bolter and missing hand/book both need to be finished. 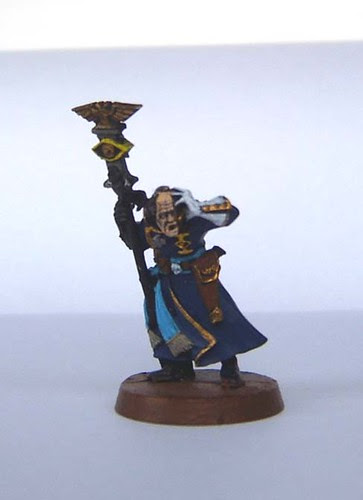 and his trusty sidekick the Astropath/Psyker/Mystic dude. This guy will change roles about as often as we change the TP, depending on which army he's in. My goal is to build a DH and WH warband, where he will be one of the Inquisitorial Henchmen, and in my IG army he'll either be my Astropath or Primaris Psyker. For some reason "Bob" sounds a like a good name, doesn't he look like a Bob to you?

Well it's been a busy week, between school and looking for a new job there just hasn't been enough time to get all the painting done that I wanted. But I added the radio set to him and did a little bit of touch up painting this morning. I hope to get another couple of hours in tonight to finish him up along with my as yet un-photographed psyker. The psyker by the way will be a part of my upcoming Inquisitorial allies. 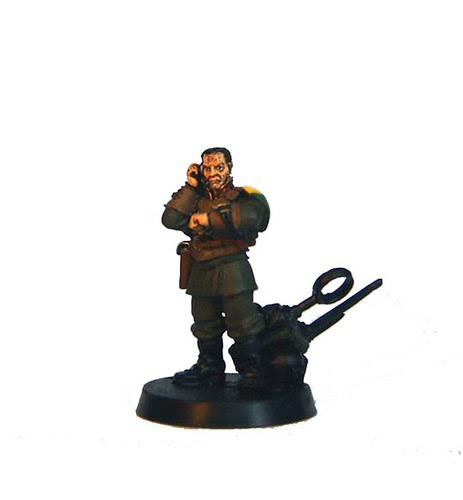 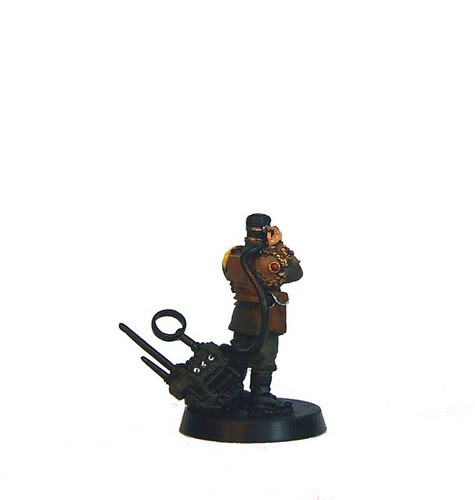 I'll get more photo's up either later today or tomorrow. Comments are (as always) welcome but by no means required.

Posted by Marshal Argos at 7:31 PM No comments:

The (late) start of a new week

Well after sitting on my arse the last few weeks thinking about what I should do next I finally decided to start up on my "Artillery Spotter" or Master of Ordnance. There's still a long way to go but for only an hours work I'm happy with em. There's nothing special about the paint job really the skin is a thinned Elf Flesh, with a thinned out "Brown Ink" , followed up by highlighting again with Elf Flesh. I haven't decided yet if how I'll highlight the uniform... we'll see what kind of crazy idea I get when the time comes. 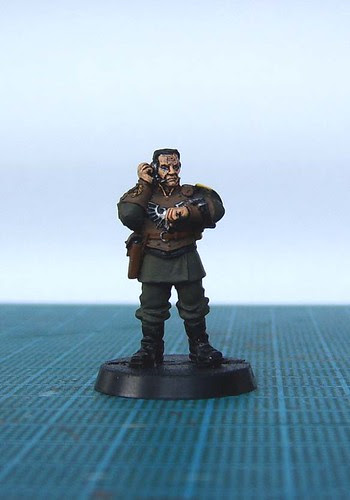 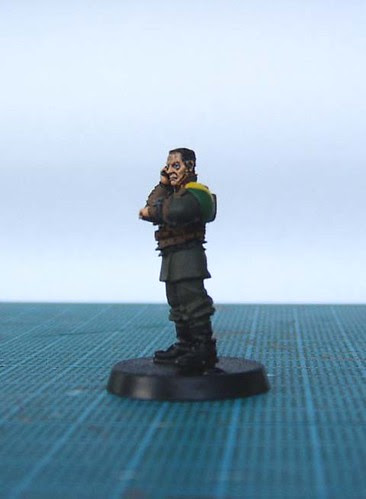 Next up is the Command Squad for 4th Platoon, Fox Company, 327 Fantoma Infantry Rgt. My IG force is almost a full Company as it is right now, but I've always wanted separate troopers to go with the Chimera's. This Platoon will be next next and will be my Armored Fist platoon. Once they're done, I'll have to go back and repaint the chimeras so that they match... 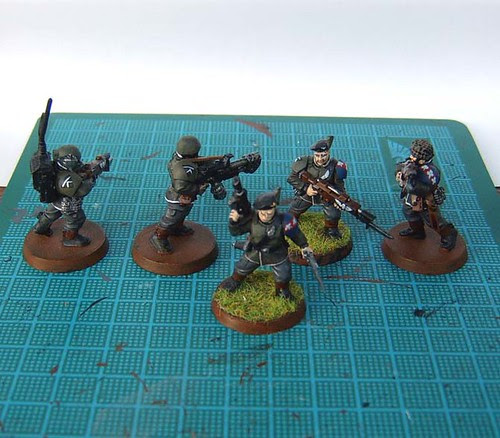 As you can see they are also a WIP both in putting them together and in painting. The two on the left still have to have their heads removed and replaced so I'm sure i'll have to touch up some of the paint job as well. That's the first thing on the to-do list tomorrow, before I do anymore work. Here's hoping to an update in the next day or so.
Posted by Marshal Argos at 9:03 PM No comments: