Do you have a mini that represents you on the table top? 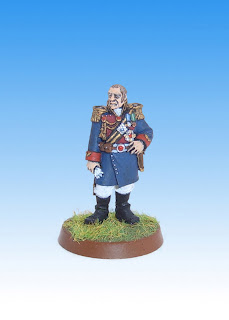 There's a question for all you gamers out there.   Above you can see mine, Marshal Argos live and in person.  In game terms I use him as a replacement for Creed, because Argos is just that bad ass.  In fact even if he's not actually taking part in the battle he can always be found somewhere on the battlefield over seeing his troops (being use as an objective marker ).  Here's a little bit of the fluff I wrote up for him.

Marshal Argos' first command was as a Lieutenant in the 215th Fantoma Drop Troop Regiment, where he served for 10 years eventually reaching the position of Major.  He first distinguished himself during the Odessya uprisings where, with less than 40 troopers he was able to hold the key town of Graves, enabling supporting armor units to rush forward and outflank the enemy positions.  Later, in the war he was appointed 2IC of the assault force going into the fortified city of Nimgen. After the war, it was said that Argos had almost a 6th sense for battle.  He was able to read the enemy's movements and counter them with ease, always ready to attack or counterattack with exactly the units needed to ensure success.   With his skill and ability, it wasn't long before he was selected to found a new Drop Troop regiment of his own, the 313th.    During the battle of Mainbaden, Argos took command of BG-82 after it's former commander is seriously wounded.  Four months later, he is promoted in rank to Marshal by sector command making his position official.  He is the first Fantoma Colonel to be advanced beyond an Imperial Guard regimental command.

So back to that question from earlier.  How many of YOU use a mini to represent yourself on the field of battle?
Posted by Marshal Argos at 11:03 PM 1 comment: