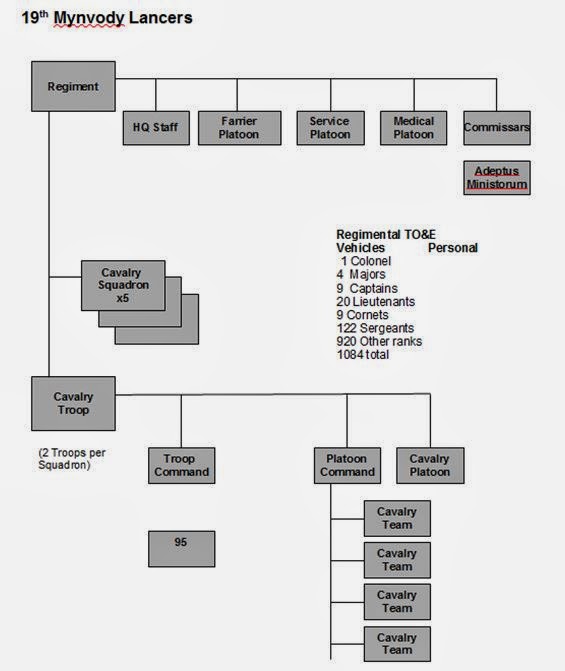 By far the smallest of the Regiments assigned to Battle Group 82, the 19th Scansin Lancers is made up of slightly more than 1000 troopers.  There ability to quickly redeploy on the field of battle more than makes up for their small numbers.  The 19th is a green Regiment and their assignment to BG82 is their first posting.  Although not requested by the Battle Group, the Regiment has been given a few chances to prove their worth to the Group.  Up until this point their usefulness has been questionable, and Marshal Argos is still undecided on their future.

Contrary to many Rough Rider Regiment's throughout the Imperium the 19th Lancers are also trained as standard guardsman.  Meaning that they can operate mounted using their Lances, or as dis-mounted infantry.  This is extremely useful for outflanking an enemy, and using the dismounted troops to set up a prepositioned firing line. Up until now, this has been their redeeming factor, the 19th has performed exceptionally well when deployed in a dis-mounted role.  Some of the lower echelon officers have even begun to voice the opinion that Group command has no idea how to properly employ cavalry.   Of course such thoughts are rarely voiced in the presence of outsiders, or within 100 meters of a Commissar, but the idea is slowly spreading throughout the battle group.

Posted by Marshal Argos at 5:30 PM