A Guide to the usage Cavalry (Part 2) 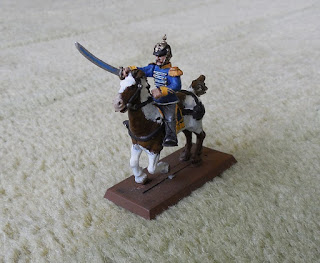 
Cavalry must seek decisive results through rapid maneuver and surprise attacks upon the weak points, and flanks of the enemy.  The Cavalry Regiments of Scansin have a unique ability in that they are trained to attack mounted, dismounted or in combination.

It’s important for Imperial Commanders to remember that the primary means of attack for a Cavalry Regiment is the mounted attack. This can be a direct attack on the enemy’s front, or in support of other elements along the enemies flank.  The primary weapons employed in a mounted attack are the lance and sword.  The Lance has been known to shock a great number of the Emperors enemies into fear, driving them from the field of battle.  The key to a mounted attack is surprise, and with the blessing of the Emperor this may be achieved by the direction of attack or rapidity of attack.  The attack may be made in smoke, or disguised by terrain.
An Imperial Commander whether it be Captain or Lord Marshal must always remember the following points to a cavalry attack.  Surprise, Supporting fire, Superior numbers, Terrain, Reconnaissance and Security are the watch words when planning all types of attacks.
It is essential that supporting elements, either infantry or armor, are deployed and prepared to assist in the attack.  If these supporting elements are not able to support a cavalry charge the attack will falter and most likely the battle lost.  This is an unacceptable loss, and would be most assuredly investigated by the commissariat. 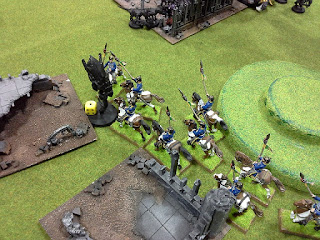 Cavalry fights in the same manner as light infantry. All Officers on Scansin are schooled in Infantry tactics starting in their first year in Officer Training School.  None the less there are a few minor differences due to the lack of native Heavy Weapons.
A main strike force made up of dismounted cavalry is rare indeed, and should be avoided less we waist Imperial resources.  A dismounted attack by cavalry should be undertaken only when necessary to take advantage of sudden opportunities, as a cavalry Regiment is not equipped or armed for sustained action.

Posted by Marshal Argos at 5:00 PM